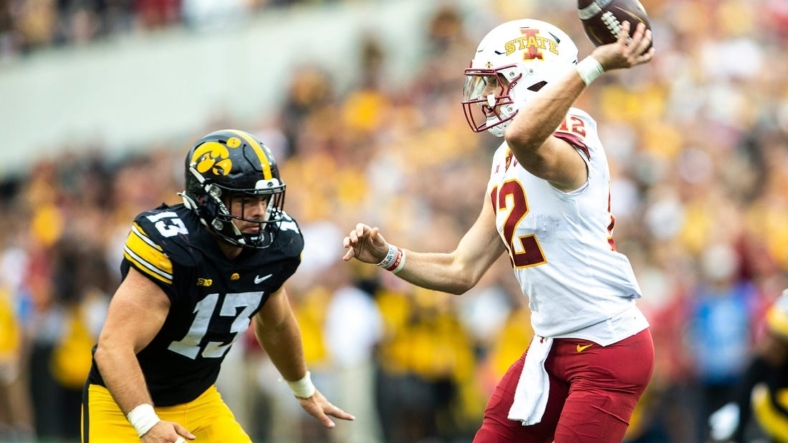 Hunter Dekkers threw for 184 yards, and his 8-yard touchdown pass to Xavier Hutchinson lifted visiting Iowa State to a 10-7 win over Iowa in Iowa City, Iowa, on Saturday.

Hutchinson caught 11 passes for 98 yards, and Jirehl Brock rushed 27 times for 100 yards as the Cyclones (2-0) ended a six-game losing streak to the Hawkeyes (1-1). It was also the first win for Iowa State head coach Matt Campbell over the in-state rival.

In a last-ditch drive, Iowa moved from its 27 to its 41 with 15 seconds left, and offsides and unsportsmanlike conduct penalties on Iowa State advanced the ball to the 39 with nine seconds left. Spencer Petras found Sam Laporta with a 9-yard pass to get to the 30, but Aaron Blom’s 48-yard field goal went wide left as time expired.

Iowa State dominated the game from scrimmage, leading in total yards 313-150 and first downs 20-11. It was Iowa’s second poor offensive performance after they managed only 166 yards while barely winning its opener against FCS power South Dakota State.

Petras completed only 12 of 26 passes for 92 yards, and running back Leshon Williams had 34 yards on 14 carries and a touchdown for the Hawkeyes.

Both teams missed scoring chances throughout the game.

The Cyclones broke through midway through the fourth quarter thanks to a monstrous drive. They went 99 yards and chewed up 11:49 off the clock over 21 plays before Dekkers found Hutchinson for the touchdown.

The Cyclones’ scoring series came after Iowa missed its own prime opportunity to take advantage of its second blocked punt, both of them by Lukas Van Ness.

The Hawkeyes started on the Iowa State 20-yard line and were on the 1 when Monte Pottebaum fumbled inches from the goal line, with Kendell Jackson making the recovery at the 1.

The Cyclones had their own goal-line frustration. In the second quarter, as they trailed 7-0, they drove 49 yards to the Iowa 1, but Brock was hit and stood up just shy of the end zone, and the ball caromed into the end zone, where Iowa’s Logan Klemp made the recovery for a touchback.