Hall of Famer Hugh McElhenny passes away at 93 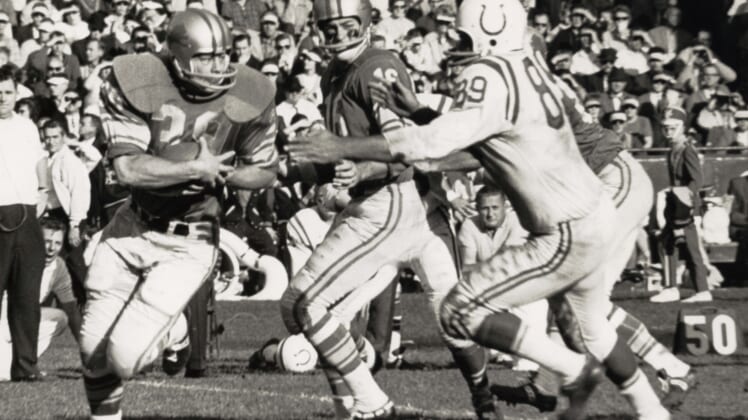 The NFL is mourning the passing of yet another legendary former player with news that Hall of Famer Hugh McElhenny has passed away from natural causes in his Nevada home at the age of 93.

Before the San Francisco 49ers became one of the successful organizations in the NFL, Hugh McElhenny led this team to prominence as a member of the now-famed “Million Dollar Backfield.”

A first-round pick of the 49ers out of Washington, “Hurryin’ Hugh” starred with Y.A. Tittle and John Henry Johnson with the 49ers when they were calling the legendary Kezar Stadium in San Francisco home.

Many of us Northern California natives grew up on stories about the elusive and dynamic running back, who played in the Bay Area for nine seasons before closing out his career with the Minnesota Vikings, New York Giants and Detroit Lions.

The Pro Football Hall of Fame first reported McElhenny’s passing with a nice tribute from its president.

The life and times of Hugh McElhenny

A track and field star during his high school days in Southern California, McElhenny caught the eyes of professional scouts after he set the state high school records in high hurdles, low hurdles and broad jump. During his amateur days, Heisman Trophy winner Tom Harmon threw huge praise in the direction of McElhenny, saying he’s “never seen such a combination of speed and size.”

In college, McElhenny made history for the Huskies by setting school records with 296 rushing yards and five touchdowns in a game agains the rival Washington State Cougars. He was ultimately selected as a first-team All-American in 1951 before San Francisco made him the No. 9 pick in the NFL draft the following year.

In nine seasons with San Francisco, McElhenny dominated to the tune of 4,288 rushing yards and 3,247 receiving yards while scoring 58 touchdwons. He was an All-Pro each o his first two seasons and earned four Pro Bowl appearances before moving on to the Vikings in 1961 where McElhenny was a Pro Bolwer in his first season with Minnesota.

Off the field, the Hall of Famer married Peggy Jean in 1954. The two remained married until her passing in Henderson, Nevada, in 2019. McElhenny is survived by his daughters Karen and Susan.