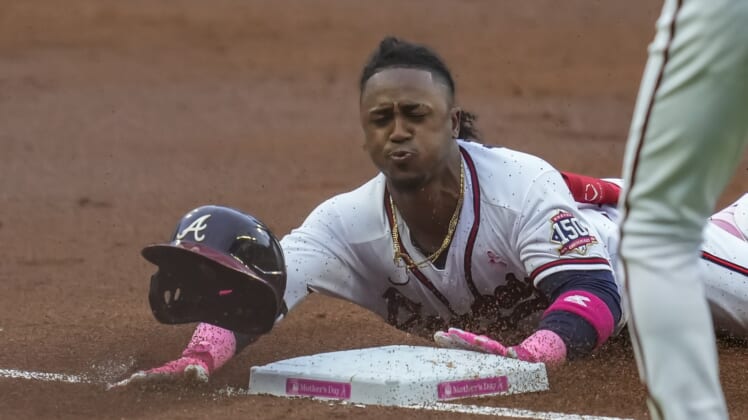 May 9, 2021; Cumberland, Georgia, USA; Atlanta Braves second baseman Ozzie Albies (1) slides into third base after hitting a triple to drive in a run against the Philadelphia Phillies during the first inning at Truist Park. Mandatory Credit: Dale Zanine-USA TODAY Sports

Ynoa (4-1) allowed only one run on four hits — one of them a home run to Andrew McCutchen on the first pitch of the game — with one walk and six strikeouts. The young right-hander has allowed two or fewer runs in six of his seven starts. Although he had one hit at the plate, Ynoa’s streak of homering in two consecutive games came to an end.

The Braves won the final two games of the three-game series, but the Phillies lead the season series 5-4.

After McCutchen started the game with his fifth home run, the Phillies offense got quiet against Ynoa and three relief pitchers, who limited them to six hits. Tyler Matzek, A.J. Minter and Luke Jackson each pitched one scoreless inning to finish the game.

The Braves scored four times in the first inning against Nola. Freddie Freeman singled in Ronald Acuna Jr., who was back in the lineup after being hit in the hand on Saturday night. Ozzie Albies chased him home with a triple and scored when Dansby Swanson followed with a two-run homer, his fourth.

Freeman added a solo homer in the third inning and continued to show signs of emerging from a slump. Freeman was 3-for-3 with a walk, scored two runs and drove in two runs. He was 4-for-11 in the series and raised his average to .217.

The Braves added an insurance run in the eighth when Austin Riley doubled home Albies. Riley had two hits and has gone 23-for-63 (.366) over his last 19 games.

The Phillies continue their nine-game road trip on Tuesday with three games in Washington. The Braves begin a three-game homestand against Toronto on Tuesday.