This Houston Texans mock draft is geared toward creative trades to maximize the caliber of talent the team can realistically acquire in the 2021 NFL Draft. 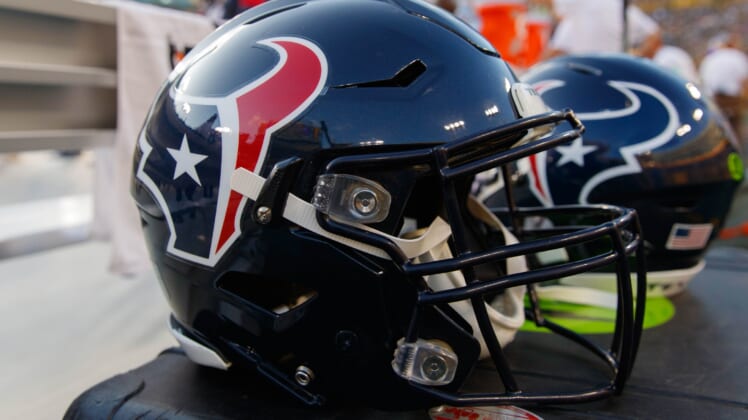 Our all-new, seven-round Houston Texans mock draft aims to fill out the maligned, talent-starved roster with as much depth and quality rookies as possible as general manager Nick Caserio embarks on a full-scale rebuild.

The Texans organization is frankly a mess and has been for several years, but their key leadership changes reflect a desire to change the culture. Caserio spent a long time in New England’s front office, and new head coach David Culley was an assistant for Kansas City, Buffalo and Baltimore in his three most recent stops.

Can Caserio and Culley ignite a drastic, swift and utterly unexpected turnaround in 2021? Well, Houston’s draft class will go a long way toward answering that question, and without a pick until the third round, it’ll take some serious magic to make that happen.

Let’s see what the Texans can do across seven rounds with trades in a simulation from The Draft Network.

Houston’s defensive line depth chart is a who’s who of veteran castoffs and no-name players. Other than Ross Blacklock, there aren’t a lot of truly explosive athletes who can really strike fear into the opposition, and what’s more, the Texans are transitioning from a predominant 3-4 front to a 4-3 under new coordinator Lovie Smith.

Usually base alignments aren’t as big of a thing in the modern game, but Smith is a throwback, old-school Tampa 2 coach who’ll want a four-man front more often than not. That’s why Milton Williams is such an interesting pick here.

Williams was an absolute workout warrior at his pro day who tested off the charts in all the major categories.

At Louisiana Tech, Williams was able to win off sheer power a lot of the time, yet he did most of his damage from the inside. With his size and strength, and with Blacklock and Maliek Collins providing size and quick rushing on the interior, Williams could be a devastating force off the edge and can rotate inside frequently as well.

This would give Smith a lot of flexibility in terms of running stunts up front, as the Texans staff tries to figure out how to work Shaq Lawson and traditional 3-4 EDGE players Jordan Jenkins and Whitney Mercilus into the equation as well.

Fans might be shaking their fists at the front office with a couple smaller-school prospects to start the draft proceedings, but patience! There are plenty of those to come on Day 3.

As it is, UCF is not a slouch of a program by any stretch of the imagination, and Richie Grant is a fully capable NFL player. Grant would bring juice to a lackluster Texans secondary and could start right away at either safety spot over Houston’s incumbent options.

The Texans’ last-ranked run defense from last season badly needs to improve. With more versatility and explosiveness up front, especially after the selection of Williams, now Houston can turn its attention to toughening up in the secondary.

Grant is someone who isn’t afraid to lay the wood on an opposing ball-carrier, as he recorded a 90.0 PFF run defense grade in 2020. With 10 interceptions and 16 passes defensed in the last three years as a UCF starter, too, Grant has the ball production you love to see, and has plenty of experience playing the slot cornerback role.

All that versatility and physicality would make Grant one of the best Day 2 selections Houston could dream of if he’s still on the board at No. 67.

How about we just get the seventh round out of the way first, because honestly, any or all of those selections are liable to be released or placed on the practice squad at best.

First among the Round 7 prospects, though, is Cornell Powell from Clemson. He joins Florida’s Trevon Grimes as two Day 3 pass-catchers the Texans add for competition in their wide receiver room.

Powell is a thickly-built, competitive wideout who’s physical at the catch point and brings some serious attitude to the gridiron. Waiting for his big opportunity as a fifth-year senior, Powell shined in 2020 with 53 catches for 882 yards and seven touchdowns.

Grimes also proved to be explosive as a member of the Gators’ passing attack. At 6-foot-4, he offers a larger catch radius than, say, Brandin Cooks, Randall Cobb and Powell do, and it’s very possible his best football is ahead in the NFL if he earns the right to more opportunities and game experience.

Back to the top now. Kendrick Green is someone who could actually start for the Texans in Week 1. He earned top-10 grades among Pro Football Focus’ qualifying guards in each of the past two seasons and is an absolute force as a run blocker.

For a Texans offense that’s liable to pound the rock a lot with David Johnson, Mark Ingram and Phillip Lindsay in the backfield and mobile QB Tyrod Taylor under center, Green would be an invaluable pick to kick off Day 3.

No spots are as valuable on defense in the modern NFL as cornerback and the edge. Brown is one of the most skilled cover corners Houston could hope to find in the fifth round, and Weaver’s lack of top-end athleticism is made up for by his advanced technique, ability to set the edge against the run and diverse arsenal of pass-rushing moves.

Brown had five interceptions in seven games for Michigan State in 2020 and can play outside or in the slot. Weaver came back after missing the entire prior season to log 14 tackles for loss and 7.5 sacks for Pitt last year.