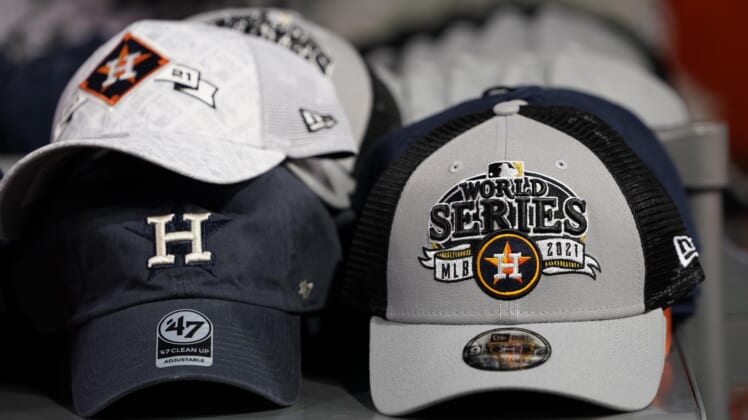 The Houston Astros will head into the All-Star Break near the top of the MLB standings. At a time when there is seemingly no threat in the AL West and starting pitcher Lance McCullers Jr. will soon rejoin the rotation, Houston seems like a lock for the MLB playoffs.

However, there is already room for a team to improve. While the Astros demonstrated they can compete with the New York Yankees, things can change in October. If the front office wants to win a World Series that the baseball world should view as legitimate, reinforcements are made.

Fortunately for the Astros, they are one of the few contenders without a need for starting pitching. It allows them to prioritize other positions, like catcher, first base and center field. The bullpen is also an area that World Series hopefuls always look to improve upon, too.

Keeping all that in mind, we’ll examine four MLB trades that could help the Houston Astros win the World Series in 2022.

In an ideal world, Willson Contreras shouldn’t actually be Houston’s top target. While Oakland Athletics catcher Sean Murphy isn’t performing at an All-Star level with the bat, he is outstanding behind the plate and under contractual control through 2025. Oakland would set a ludicrous asking price for him and considering the state of Houston’s farm system, a deal seems impossible.

Contreras is an extraordinary fallback plan. There will be significant competition for him, including from AL teams. The factor that makes him more appealing in the Astros’ situation, his status as a half-season rental deflates what the Chicago Cubs can get back in a trade.

Look at the current state of the Astros’ catchers. Houston ranks 29th in FanGraphs WAR (-0.5), 29th in OBP (.227) and 28th in wRC+ (47). For as great as this pitching staff is, especially as of late, Martin Maldonado doesn’t do enough behind the plate to justify his negative contributions with the bat.

This deal requires Houston to trade three of its top-10 prospects for Contreas. However, none of the players involved are top-100 prospects. Forrest Whitley used to be, but erratic command and Tommy John surgery suggest he might be a reliever. Pedro Leon is an intriguing lottery ticket for Chicago, while Yainer Diaz could be the Cubs’ catcher in 2023.

Since joining the team, Yuli Gurriel has provided the Houston Astros with plenty of production. However, Father Time catches everyone. The 38-year-old first baseman made up for his poor fielding at first base (5th percentile Outs Above Average) with great production at the plate. In 2022, he’s slashing .233/.286/.396 with a .683 OPS and 96 wRC+. Winning a World Series means replacing him in the lineup.

Houston uses its wealth of young pitching and a recent convert to catcher to upgrade at first base. Mancini is a better hitter than Gurriel, boasting a .282/.355/.423 slash with a 122 WRC+ and .777 OPS. This also goes a step further. While he only has eight home runs in 76 games, Baseball Savant shows that’s entirely park related. Using ‘Expected Home Runs by Park’, Mancini would have 21 in Minute Maid Park compared to 8 in Camden Yards. 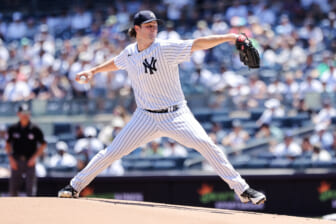 Mancini is also better defensively, is capable of playing the corner outfield and he’s beloved in the clubhouse. While there is a mutual $10 million option for 2023, Mancini is effectively a free agent once he declines it.

On the surface, it might not seem like the Houston Astros bullpen needs reinforcement. As of July 9, the unit boasted the lowest ERA (2.62) in the majors with a stellar .199 batting average allowed and a 1.12 WHIP. With that said, adding another quality arm would be a smart move.

Throw Joe Jimenez into the mix. The Detroit Tigers reliever boasts the sixth-highest Pitching+ among qualified relievers, per Eno Sarris of The Athletic. It explains why he boasts an elite 32.8% strikeout rate and his Skills-Interactive ERA (2.34) suggests he’s even better than his current 3.06 ERA.

Best of all, Jimenez is under team control next year. The 27-year-old is showing all the stuff to become one of the best relievers in baseball. Given Houston’s track record with pitchers, we have reason to believe the Astros’ coaches could get the most out of him. Add him to this bullpen, along with either of the other trades, this team can beat the Yankees in the ALCS and go on to win the World Series.

While it might not seem like Houston needs starting pitching, the front office is reportedly scouting starters. Luis Castillo would be the ideal option, but the Astros might want to diversify their adds instead of devoting everything to the top player on the market.

Tyler Mahle should be an appealing option for Houston. The 27-year-old is under contract through 2023 and with Justin Verlander expected to test free agency this winter, there could be an opening in the rotation. While Mahle profiles as a No. 4 starter right now, there is a much higher ceiling.

From May 8 – June 26, 10 starts before he landed on the injured list, Mahle posted a 3.50 ERA with a .210 batting average allowed and a 1.09 WHIP. Taking a deeper look at his stretch of excellence, he allowed just an 8% Barrel rate and racked up a 12% Swinging Strike rate. He’s also a much different pitcher away from Great American Ballpark and getting him to a new team with a great coaching staff could help him achieve his potential as a high-end No. 3 starter.