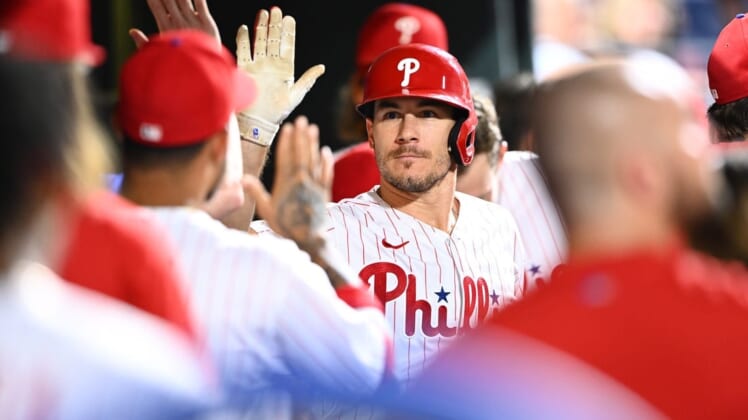 The Philadelphia Phillies will look for a four-game series sweep when they host the reeling Cincinnati Reds on Thursday night.

The Phillies made it three straight when they won 7-5 on Wednesday thanks in large part to red-hot J.T. Realmuto’s three hits, including a solo home run.

Realmuto is 12-for-25 in a six-game hitting streak, and Nick Castellanos added two hits to extend his hitting streak to 14 games.

Plain and simple, the Phillies are surging at the right time as they search for their first playoff berth since 2011.

“We’ve got to focus on ourselves and win every game we can,” Realmuto said in a postgame interview on NBC Sports Philadelphia. “We have to give ourselves the best chance.”

The recent wins, coupled with Bryce Harper’s success in two rehab games at Triple-A Lehigh Valley, point to future success for the Phillies.

Harper, who won the National League Most Valuable Player award last season, hit two home runs for Lehigh Valley on Tuesday and came back with a walk-off, two-run double Wednesday. He is 5-for-8 with six RBIs in his two Triple-A outings.

“A possibility, yeah,” Phillies interim manager Rob Thomson said of Harper returning before Saturday. “It just depends on how he feels.”

Harper has been out since June 25 with a broken left thumb.

The Phillies will hand the ball to Aaron Nola (8-10, 3.25 ERA) on Thursday. In Nola’s latest start, on Friday against the New York Mets, he allowed eight hits and five runs in five innings, though he struck out nine and walked only one.

The Reds managed 10 hits on Wednesday but went 0-for-5 with runners in scoring position and left seven on base.

Stuart Fairchild and Kyle Farmer each hit a solo home run. Jonathan India, who had an RBI double, left the game with a leg injury, and his status was unclear for Thursday. Mike Moustakas injured his left calf on Tuesday and was held out of the lineup on Wednesday.

Even with a depleted roster, the Reds continued to compete.

“Our offense was really able to chip away to the point of getting the winning run to the plate,” Reds manager David Bell said. “Not ideal. Really throughout the game, we thought we were going to come back and win.”

Justin Dunn (1-1, 6.08 ERA) is scheduled to start for the Reds on Thursday. In Dunn’s most recent outing, he got a win after tossing five innings against the Pittsburgh Pirates on Saturday. He gave up three hits and one run to go with four strikeouts and four walks.

Dunn, who has never faced the Phillies, picked up his first victory since April 15, 2021, when he pitched for the Seattle Mariners.

“It’s amazing,” Dunn said after the victory. “It feels good to finally to contribute to a win with this team. It’s a big weight off my shoulders. I’m excited to get it rolling from here. Hopefully, it’s the first of many more.”

Reds catcher Chuckie Robinson made his major league debut on Wednesday and went 1-for-2 while becoming the 58th player to appear for the Reds this year. The previous mark of 57 was set by in 2003.