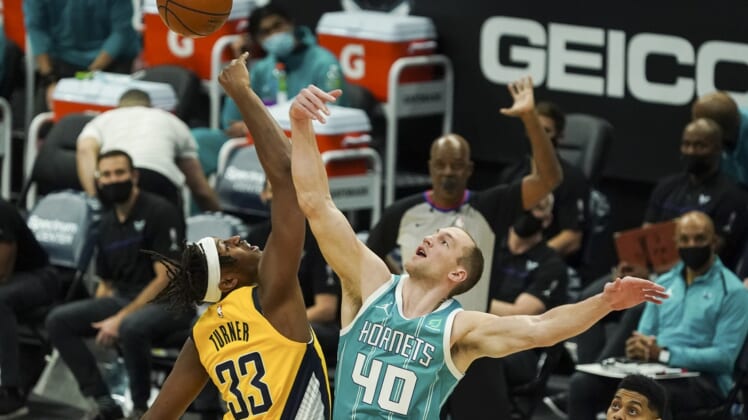 There was reason to marvel at many of the offensive contributions for the Charlotte Hornets in their Friday night victory.

However, there is bound to be extra attention placed on the defensive end for Charlotte’s Saturday night encounter with the Milwaukee Bucks.

“The same mindset we had (Friday),” Hornets guard Devonte’ Graham said of the game plan. “We have to come out and play defense. The last thing we have to worry about is offense. We have to get stops, especially against those guys.”

The Bucks will arrive in Charlotte licking their wounds a bit after a 131-126 road loss to the New Orleans Pelicans on Friday night.

The Hornets came up with all sorts of answers while topping the Indiana Pacers 108-105 on Friday, avenging a loss to the same team two nights earlier.

Charlotte made key plays down the stretch after a double-digit lead had vanished. Hornets coach James Borrego liked the poise his team demonstrated.

“We’ve grown in that area,” he said. “I think we’re one of the better clutch teams in the NBA.”

While the Hornets were winning, the Bucks stormed back from a 29-point hole before falling at New Orleans. A 44-point third quarter helped Milwaukee trim the deficit to four points in the closing seconds.

Still, the outcome snapped Milwaukee’s two-game winning streak. The Bucks have yet to exceed four straight victories this season, so they are still looking to sustain a good roll.

“You see the record last year, you want to continue that and even make it better,” said Bucks guard Jrue Holiday, who joined the team during the offseason. “There is some pressure in that way.”

The Bucks might have some defensive concerns. The Pelicans, who posted a season-high point total, compiled a franchise-record-tying 21 3-point baskets against Milwaukee’s defense.

Charlotte found the long-range touch on Friday, something that made the Hornets more difficult to defend.

“When we make 16 threes, we’re a different team,” Borrego said. “Obviously, you have to make shots in this league to win.”

Perhaps most important for the Hornets was a strong output from reserves, something that could come in handy with the rapid-fire nature of their schedule.

The Hornets haven’t won consecutive games since a four-game winning streak ended Jan. 11. They need to rekindle good vibes with the quick turnaround.

“Having that momentum going into (the Bucks game) will definitely help,” Graham said.

Charlotte has enjoyed steady improvement during the past week from Cody Zeller. The center returned to action Jan. 22 following an absence stemming from a broken hand sustained in the season opener.

“I just try to make a difference out there,” Zeller said.

Just how well the Bucks respond from the game in New Orleans will be important. There were several emotional factors, including a crowd in New Orleans on Friday night despite the pandemic.

For Holiday, the contest was a return to the arena where he once played for the Pelicans, so he’ll have to refocus for the visit to Charlotte. He is still trying to adjust to his new team.

“It has been a challenge,” Holiday said. “That’s definitely part of the fun.”

The Hornets have hit a particularly busy stretch, as they will play their fifth game in eight nights. The Bucks will be ending a three-game, four-day road trip.

Milwaukee defeated the Hornets in all three meetings last season, including a Jan. 24, 2020, matchup in Paris.