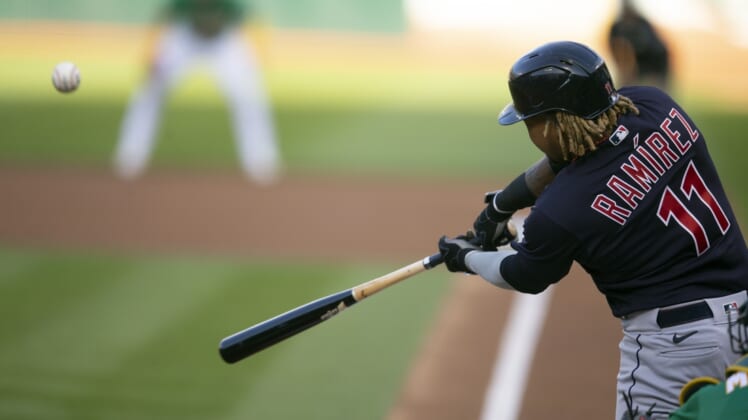 Jose Ramirez added three RBIs on a solo shot and a two-run double while reaching base four times and scoring three runs. Ramirez, who played in his 1,000th game with the franchise, is batting .360 with seven homers and a major-league best 28 RBIs.

Sheldon Neuse had three hits and three RBIs and Sean Murphy smacked a three-run homer for Oakland, which has lost four of its last six games.

Gimenez and Myles Straw each had three hits for the Guardians, who finally prevailed in the eighth contest of a 10-game road game.

Cleveland erupted for four runs in the seventh to turn an 8-5 deficit into a one-run edge.

Straw led off with a double and moved to third when Owen Miller’s high fly dropped into shallow left field for a double. Domingo Acevedo entered in place of fellow right-hander Justin Grimm and Ramirez responded by ripping a two-double inside the right-field line to pull the Guardians within 8-7.

Naylor came up and sent a 1-2 changeup from Acevedo (0-1) over the wall in right to move Cleveland in front.

Trevor Stephan (2-0) retired six straight batters and fellow right-hander Emmanuel Clase stranded a runner at third in the ninth to notch his third save.

Oakland’s Kevin Smith led off the ninth with a double inside the first-base line and moved to third on Neuse’s grounder to the right side. Smith remained at third on Jed Lowrie’s infield out before Murphy fanned to end the game.

Indians right-hander Aaron Civale was touched for six runs and seven hits over four innings. He struck out three and walked one.

Ramirez homered in the first inning before Murphy countered with his three-run blast in the bottom half. Billy McKinney added a sacrifice fly later in the frame to give Oakland a 4-1 lead.

Gimenez belted his grand slam in the third to put Cleveland ahead. But Oakland regained the lead at 6-5 in the fourth on Tony Kemp’s foul sacrifice fly and Neuse’s RBI ground single.

Neuse added a two-run triple just inside the right-field line in the sixth to push the Athletics’ lead to 8-5.