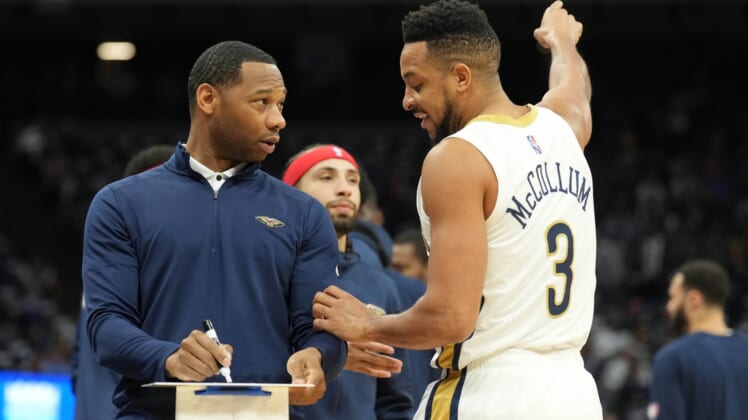 The Memphis Grizzlies are tuning up for the Western Conference playoffs.

The New Orleans Pelicans will be trying to clinch a home game in the play-in tournament as they visit the Grizzlies on Saturday night.

The Grizzlies (55-25), who have won two of three games against the Pelicans this season, are locked in as the No. 2 seed and hope to get Ja Morant back Saturday to hone his game for the postseason.

The ninth-place Pelicans (36-44) will face the 10th-place San Antonio Spurs in a play-in game next Wednesday. If New Orleans wins either of its final two games or the Spurs lose either of their final two, that play-in game will take place in New Orleans.

“We want that game here in New Orleans,” center Willy Hernangomez said after scoring 17 points and grabbing 14 rebounds in a 127-94 home victory against the Portland Trail Blazers on Thursday. “We want the city to get crazy. We need that. It’s going to be fantastic to play at home.”

The Pelicans have won three of their last four home games, but the loss was to the Spurs on March 26.

Against the Blazers, the Pelicans started slowly and trailed for most of the first quarter before the bench gave them a lift. In the end, seven reserves scored, led by Hernangomez as well as Larry Nance Jr. and Trey Murphy III (12 points each).

“Our bench was great,” said CJ McCollum, who led the team with 23 points. “They brought energy, they pushed the pace.”

New Orleans rolled despite the absence of forward Brandon Ingram (22.7 points per game), who is questionable for Saturday because of hamstring tightness.

Grizzlies coach Taylor Jenkins said he would like to have Morant, who has missed the past nine games because of a sore right knee, back for one of the final games in preparation for the playoffs. Memphis hosts Boston on Sunday.

Jenkins said Morant, who’s averaging 27.6 points, has increased his load in the past week and had progressed to five-on-five work.

“That’s really encouraging.” Jenkins said. “He responded well afterwards. We’re just going to continue to take it day by day and see how he responds.”

Ultimately whether Morant plays this weekend will be determined by a medical evaluation.

“If we don’t feel like (playing Morant) is the smartest move, then we won’t do it,” Jenkins added.

The Grizzlies, who can set a franchise record for victories in a season by winning these last two games, completed their road schedule with a 121-115 overtime loss against Utah on Tuesday and a 122-109 loss to Denver on Thursday.

“We were just kind of tired tonight,” said Brandon Clarke, who had 11 points in 13 minutes off the bench against the Nuggets. “It’s kind of hard to play versus the Jazz then Denver and fly and all that. I think when we go back home, we’ll be charged up and be able to get those two (games) hopefully.”