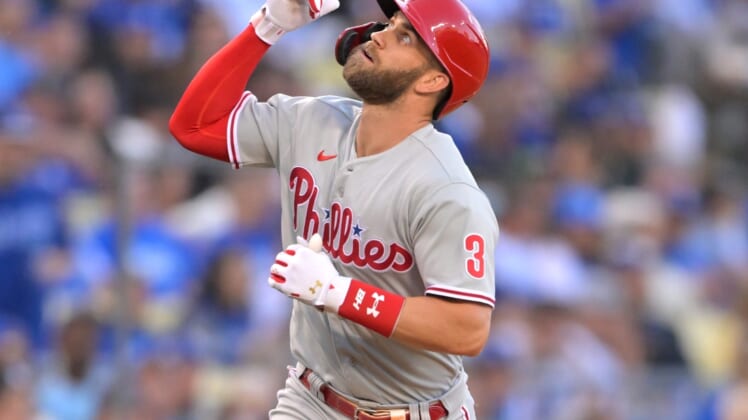 The Philadelphia Phillies completed one of their most successful West Coast road trips in recent memory, yet they came away disappointed.

On the verge of a four-game sweep over the Los Angeles Dodgers, the Phillies squandered a 4-3 lead Sunday and fell 5-4 when the Dodgers scored two runs in the bottom of the ninth inning.

Still, following a 5-2 road trip, the Phillies look to bring some positive momentum home Tuesday as they open a three-game series against the San Diego Padres.

“It’s just frustrating altogether,” said closer Corey Knebel, who allowed both ninth-inning runs. “It would be nice to have a sweep against these guys. It’s tough to do in this place. Coming into Dodger Stadium, winning three out of four is still good. But I would have loved to have that sweep.”

Reigning National League MVP Bryce Harper was red hot in the first three games against the Dodgers, going 8 for 12 with eight RBI. Seven of the eight hits went for extra bases.

Harper has been the designated hitter as he has been dealing with a small tear in the ulnar collateral ligament of his right elbow. He was given Sunday off despite his hitting prowess in the series and might receive an injection to aid his elbow. It’s uncertain whether Harper will be in the lineup Tuesday.

By Monday afternoon, the Phillies had not announced a starting pitcher for Tuesday, though it’s likely that right-hander Zach Eflin will head to the mound. Eflin (1-2, 4.50 ERA) is eligible to come off the COVID list. He is 1-1 with a 4.02 ERA in three career starts against the Padres.

When Eflin last pitched May 1 against the Mets, he was roughed up for six runs (five earned) in 4 1/3 innings.

The Padres will arrive in Philadelphia having won two of three against the Braves in Atlanta. On Sunday, the Padres pulled out a scintillating 7-3 victory with four runs in the 11th inning.

Interim manager Ryan Christenson has been filling in while Bob Melvin is on the mend from prostate surgery.

“I was just texting Bob earlier, after the game here, just about the grit that the team is showing right now,” Christenson said. “Just the whole series, really, like we were talking about the other day. It’s just two teams just slugging back and forth at each other. And it was just good to see these guys continue to fight and prevail.”

Robinson Cano went 0 for 5 in his first start with the Padres since the 39-year-old had been released by the New York Mets. His new club still got the victory Sunday and Cano knows why.

“The chemistry here is on another level,” Cano said. “I think that’s why they play so good, because the chemistry is always there and that’s what you need as a team. You got a guy like Manny (Machado), (Eric) Hosmer. Everybody’s like joking around, everybody’s together.

“I like that the bullpen, the starters, they all get along and that’s good. Nobody thinks they’re bigger than anybody else.”

The Padres are scheduled to send right-hander Mike Clevinger (0-0, 5.00 ERA) to the mound. He has never faced the Phillies.