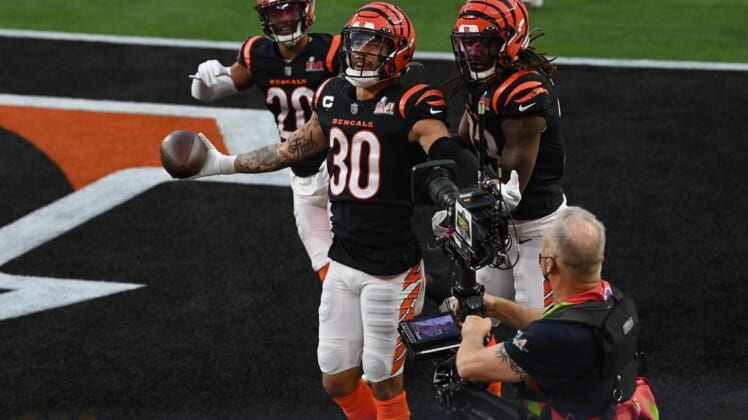 Holdout Jessie Bates is back with the Bengals, but the safety might not be on the field for Cincinnati any time soon.

The franchise-tagged Bates met with the team brass on Tuesday morning before joint workouts with the Los Angeles Rams were scheduled to begin. He signed the franchise tender, but he will need to be cleared physically before an upramp toward playing in the regular season can begin.

Progress to reach a long-term deal before the July 15 deadline fell apart because of limited guarantees in the deal, NFL Network reported. Since then, the safety market was reset by the four-year, $76.5 million contract the Los Angeles Chargers gave Derwin James.

Bates told the team in February he had no intention of reporting to training camp or playing under the terms of the franchise tag, which was applied by the Bengals to keep him from unrestricted free agency. The one-year tender for safeties under the rules of the franchise tag brings a 2022 salary of around $13 million.

However, Bates said during Super Bowl media interviews that injuries and the lack of guarantees or bonuses in the franchise agreements make them a high-risk proposition.

Bates, 25, has started all but two games for the Bengals since entering the league as a 2018 second-round draft pick. A second-team All-Pro in 2020, Bates has compiled 408 tackles, 35 pass breakups, 10 interceptions, two forced fumbles and two fumble recoveries over four seasons.

Bates added two interceptions in the 2021 playoffs, including one of the Rams’ Matthew Stafford during Super Bowl LVI, along with six pass breakups.