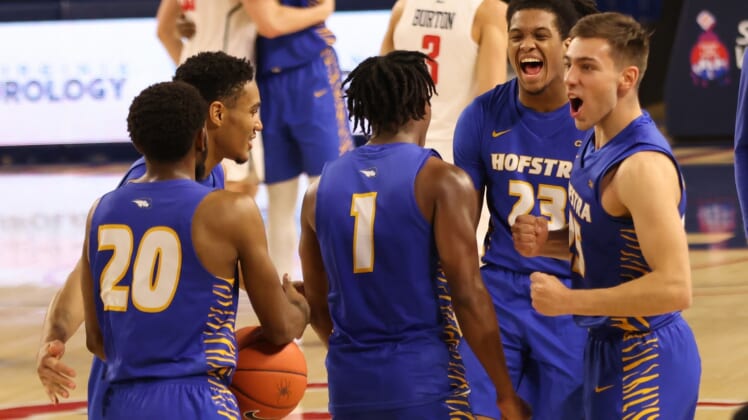 Hofstra promoted alumnus Speedy Claxton to be its next head basketball coach, the school announced Wednesday.

Claxton played in the NBA from 2001 to 2009 for five teams, winning an NBA championship with the San Antonio Spurs in 2003. He was the 20th overall pick in the 2000 NBA draft by the Philadelphia 76ers.

Before that, the 5-foot-11 guard from Hempstead, N.Y. starred for his hometown Hofstra, playing for Jay Wright before Wright moved on to Villanova. Claxton was a two-time America East Conference Player of the Year, ranks eighth in school history with 2,015 points and had his No. 10 retired by the program.

“Today is a dream come true for me,” the 42-year-old Claxton said in a news release. “With that dream comes responsibility, I know the incredible history of the Hofstra men’s basketball program. I have lived it. I have experienced it. I have coached it. And today I am ready to lead it. Everything about Hofstra and our men’s basketball program is special to me and I look forward to continuing the success this program experiences year in and year out. Thank you to all my mentors who have made today possible and a special thank you to Coach Mihalich for his guidance over the last eight years and for leading this program to incredible heights.”

Claxton has worked on the Pride’s coaching staff since 2013. He replaces Joe Mihalich, who stepped down as head coach in March following a medical leave and took a different position in Hofstra’s athletic department.

“What an exciting day for Hofstra University and our men’s basketball program,” athletic direcitor Rick Cole Jr said in the news release. “There is no better person than Speedy Claxton to lead our team and build upon the outstanding successes this program has experienced during its rich history. Speedy’s relationship with Hofstra goes back many years, and he is ready to take the next step and become our head coach. It has been an amazing career and life for Speedy and the entire Hofstra community looks forward to following this next step in his journey.”

Claxton will be charged with running a program that won back-to-back Colonial Athletic Association regular season titles in 2019 and 2020 but has failed to qualify for the NCAA Tournament since 2001 — just one year after his departure.