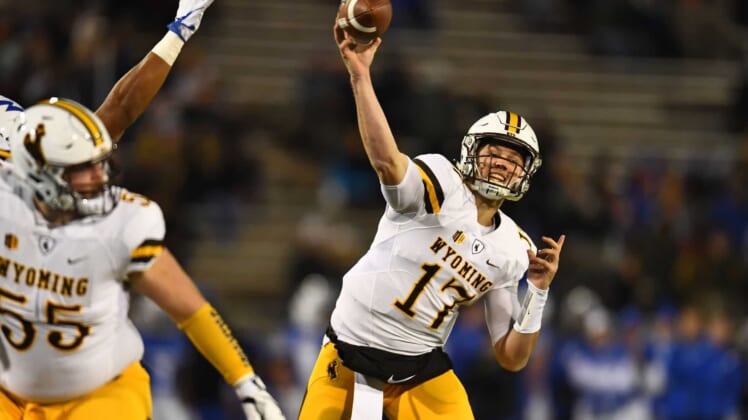 Josh Allen is destined to either become one of the biggest draft busts in NFL history or one of the league’s rare cases where a player who struggled in college became an exceptional pro.

Blessed with arm strength most quarterbacks cannot even fathom, Allen has become this year’s most hyped prospect based on pure potential, rather than actual college production. Allen’s accuracy issues are well documented by now. Everyone who’s been paying attention to this young man throughout the pre-draft process knows he struggled to hit the broad side of a barn with a handful of rice at times during his tenure at Wyoming.

That being said, there are many who are attempting to explain away these accuracy issues due to the poor talent around Allen this past year at Wyoming. Never mind that his accuracy issues were just as prevalent in 2016 when he had pro-level talent to work with.

In the three seasons Allen spent at Wyoming, he completed just 56.2 percent of his passes. And my goodness, many of his misses were mind-boggling.

Great job avoiding pressure but then instead of realizing no one is in front of him for 15 yards, he launches an absolutely hideous deep ball that lands 10 yards away from the closest WR pic.twitter.com/akqe6z1xCB

Now comes a very intriguing set of numbers that shows Allen has struggled with accuracy going all the way back to his days at Firebaugh High School.

This is just frighteningly bad. No matter what level, Allen has struggled to complete the ball in the passing game. It’s not just that he’s inaccurate, either. He routinely makes poor decisions that, at the NFL level, will lead to receivers getting injured and turnovers galore.

There are strong rumors out there that the Cleveland Browns are considering Allen at No. 1 overall.

Given that franchise’s penchant for absolutely screwing things up at this most critical position, we wouldn’t be shocked if it actually happens. Just don’t go holding your breath waiting for Allen to finally break the streak of horrible quarterback play in Cleveland.