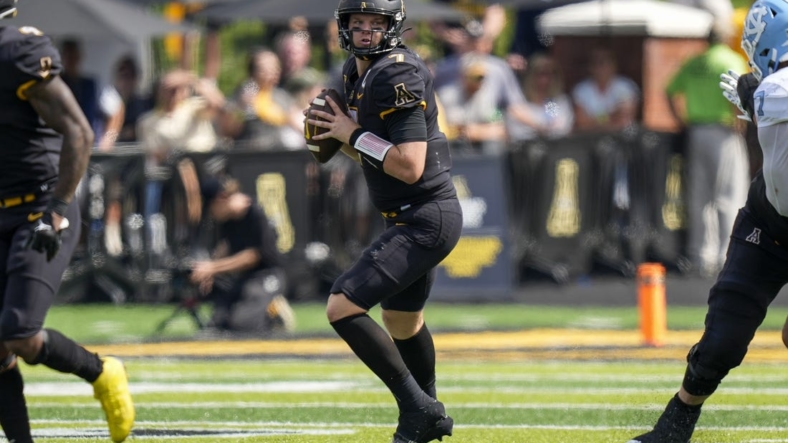 After losing in a high-scoring season opener, Appalachian State will take its potent offense down to the southwest to face No. 6 Texas A&M on Saturday in College Station, Texas.

Appalachian State failed to score on a pair of two-point conversion attempts late in the fourth quarter and fell 63-61.

Mountaineers quarterback Chase Brice — who has had previous stops at Duke and Clemson — threw a school-record six touchdown passes, including four in the last 10-plus minutes of the game. He finished the day 25-of-36 passing for 361 yards.

Despite the defeat, Brice was appreciative of the atmosphere amplified by a record crowd of 40,168 at Kidd Brewer Stadium in Boone, N.C.

“It was electric. I want to give a huge shoutout to the fans from both sides for coming up and being respectful,” Brice said. “I thought it was a great bloodbath between two really good programs. It was just an awesome experience.”

Having previously played in the Atlantic Coast Conference, Brice has played in loud and wild environments before, but Kyle Field is one of the biggest stadiums in college football and can pack in more than 100,000 people. Texas A&M (1-0) won handily there on Saturday, beating Sam Houston 31-0.

The Aggies-Mountaineers game could be another one that shows video-game-like numbers on the scoreboard.

Like Brice, Aggies quarterback Haynes King put up big passing stats in his team’s season opener, completing 20 of 31 passes for 364 yards and three touchdowns. His favorite target was Ainias Smith, who had six catches for 164 yards and two scores.

Despite King throwing a pair of interceptions, Aggies coach Jimbo Fisher said he liked the confidence he showed.

“You have to have aggressive intelligence. You got to play aggressively, intelligent,” Fisher said. “You can sit there and say, ‘Don’t throw interceptions’ all day, but we also hit as many big plays as we’ve hit in a long time, too. There was a lot of balls down the field that were hit. There was a lot of catches down the field, these young guys. We just got to clean up.”

Fisher said Aggies tight end Max Wright (knee) is “a question mark” this week and that center Bryce Foster (undisclosed illness) is day-to-day. But after not playing in Week 1, cornerback Jaylon Jones and defensive lineman McKinnley Jackson are expected back.

Even though Appalachian State is 1-6 all-time against opponents in the top 10 of The Associated Press poll, many remember the 2007 stunner against fifth-ranked Michigan, when the Mountaineers won 34-32.

In short: The Aggies can’t overlook the Mountaineers.

“They run that stretch play. That wide stretch play as good as anybody, man,” Fisher said. “And they got really good skill guys, so it’s going to be a challenge.”