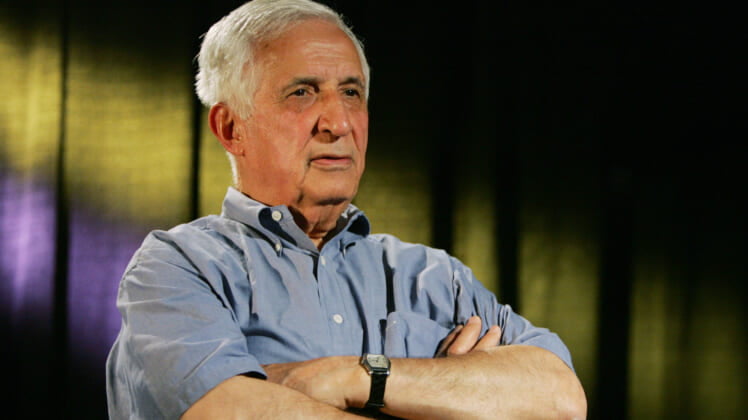 MINNEAPOLIS – JULY 31: Sid Hartman gives an interview with Todd Kayso before the Mikan memorial service July 31, 2005 at the Target Center in Minneapolis, Minnesota. NOTICE TO USER: User expressly acknowledges and agrees that, by downloading and /or using this Photograph, user is consenting to the terms and conditions of the Getty Images License Agreement: Mandatory Copyright Notice: Copyright 2005 NBAE (Photo by Melissa Majchrzak/NBAE via Getty Images)

Sid Hartman, the longtime columnist for the Star Tribune of Minneapolis and a noted booster for sports in the region, died Sunday. He was 100 years old.

Hartman played a big role in drawing professional sport teams to Minnesota, going back to 1947, when he paid $15,000 to the owner of the Detroit Gems of the NBA to bring the team to town.

While still a newspaperman, he also served as the de facto general manager of the renamed Minneapolis Lakers, who, led by the 6-foot-10 George Mikan, won the NBA title in 1949 and five in total before the franchise moved to Los Angeles in 1960. Hartman left the organization three years before the move.

The prolific Hartman hardly slowed with age. He produced 21,235 bylined stories in his career, according to a Star Tribune staffer’s count. Those stories began in 1944, and the last one came in Sunday’s sports section. It was his 119th this year, according to the newspaper.

“I have followed the advice that if you love what you do, you never work a day in your life. Even at 100, I can say I still love what I do,” Hartman wrote in a column that ran on his 100th birthday on March 15.

In a statement Sunday night, Major League Baseball commissioner Rob Manfred called Hartman “a singular figure of the Minnesota sports scene throughout the entire history of the Twins franchise, and a friend to so many throughout our National Pastime. Appropriately, he was member number one for the Baseball Writers’ Association of America at the time of his passing, as well as the organization’s longest tenured member.”

The Minnesota Vikings said in a statement, “Our hearts are broken with the news of Sid Hartman’s passing. It is nearly impossible to put into words what Sid meant to the sports world and to Minnesota.”

“He was an iconic sports figure, a tenacious reporter and a tireless advocate for his beloved state,” the Vikings’ statement continued. “His doggedness and work ethic were unmatched, but it was Sid’s ability to nurture relationships that truly set him apart. He was a confidant and a loyal friend to countless athletes and coaches across the country.”

Adam Thielen, a wide receiver for the Vikings, said he “just heard a story from (Hartman) the other day, and he was obviously a big part of this organization and was always around the facility, so we are grieving during this time.”

Hartman was born in Minneapolis on March 15, 1920, and he worked for newspapers in his hometown for most of his life, according to the Star Tribune. At the time of his death he still was writing three or four columns a week.