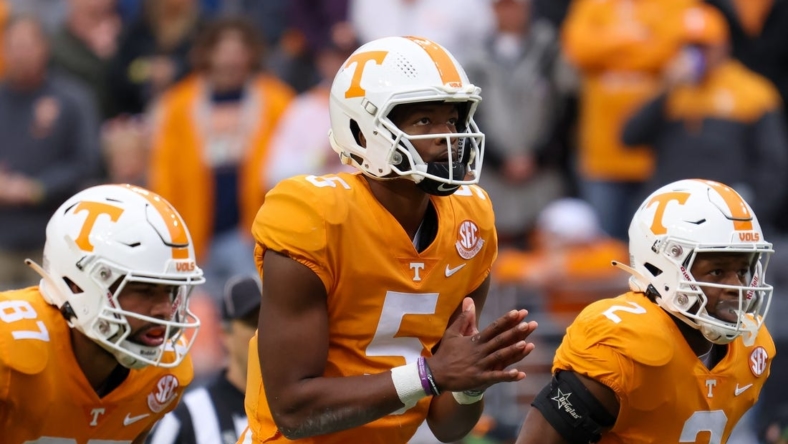 Hendon Hooker passed for 355 yards and three touchdowns and also rushed for a score to lead No. 5 Tennessee to a 66-24 victory over Missouri in Southeastern Conference play on Saturday afternoon at Knoxville, Tenn.

Jalin Hyatt had seven receptions for 146 yards and a touchdown and Bru McCoy caught nine passes for 111 yards as Tennessee scored 40 or more points for the seventh time this season.

Hooker completed 25 of 35 passes and also rushed for 50 yards for Tennessee, which racked up season bests for points and total offense (724 yards).

Brady Cook completed 19 of 32 passes for 217 yards and two touchdowns and rushed for 106 yards for Missouri (4-6, 2-5). Tauskie Dove and Dominic Lovett caught touchdown passes and Luther Burden III was credited with a rushing score.

The Tigers finished with 389 total yards.

Missouri trailed 28-24 after Cook threw a 38-yard scoring pass to Lovett with 8:55 left in the third quarter but the Volunteers responded with 38 unanswered points.

First, Hyatt came out of the backfield and was left uncovered and caught the ball just before midfield and scampered 68 yards to make it an 11-point game with 8:30 left in the period.

The next time the Volunteers had the ball, Hooker finished it with a 2-yard scoring pass to Fant to make it 42-24 with 4:34 remaining.

Tennessee increased the lead to 25 when Wright scored from the 1 with 1:19 left in the quarter.

Chase McGrath’s 46-yard field goal made it 52-24 with 7:54 left in the game. The Volunteers piled on with backup Joe Milton III tossing a 46-yard touchdown pass to Ramel Keaton and Dylan Sampson scoring from the 2.

Tennessee drove 91 yards on its first possession with Jabari Small scoring on a 10-yard run. The Tigers tied it when Burden caught a backward pass and took it 4 yards for the score with 1:56 left in the opening quarter

Wright scored from the 3 as the Volunteers took a 14-7 lead 19 seconds into the second quarter. The lead increased to 14 when Hooker tossed a 19-yard scoring pass to Fant with 10:24 to play.

Cook tossed a 43-yard touchdown pass to Dove to pull the Tigers within 21-14 with 5:48 remaining in the half. Tennessee answered with Hooker’s 14-yard keeper.

Harrison Mevis booted a 32-yard field goal to bring Missouri within 11 as time expired in the half.