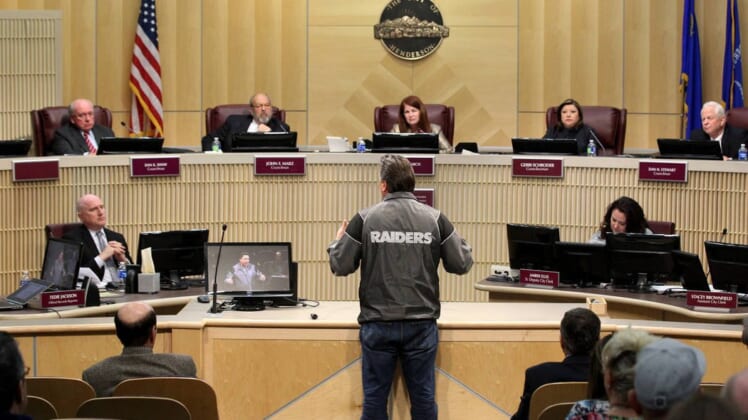 Although it has been far from a secret, the Henderson City Council officially approved moving forward on a land sale that will land it the permanent home and practice facility for the future Las Vegas Raiders home.

If Henderson was a football team, you could classify its action tonight as a march down the field culminating in a game-winning touchdown.

Las Vegas’ neighbor to the south scored a big win as it unanimously approved the sale of a 55-acre parcel to the team near the corner of St. Rose Parkway and Executive Airport Drive at half the current market value. The Raiders will pay just over $6 Million for the $12 Million parcel to house their projected $75 Million state-of-the-art practice facility and organization headquarters. The team said it plans to move in during the spring of 2020 – just a few months prior to the team’s $1.9 Billion stadium’s completion.

The site of the future $75 Million Raiders practice facility and team headquarters in Henderson.

The sale of the land was not voted on, only the ability for the City Council to have approval to move forward with the deal for a vote at a later date.

“It’s going to be fantastic,” said Tommy White, Business Manager of the Laborers Local 872 and Las Vegas Stadium Authority board member. “We’re going to see Henderson really boom. The Raiders have their heart set on bringing something to the Las Vegas area that they don’t have anywhere else.”

Henderson laid out a definitive return on investment for selling the property at a special price to the Raiders. It include a projected tax revenue from the facility of over $13.8 Million over 30 years, 250 new high-paid jobs, increased hotel tax revenue from room nights, future business development, and a $22 Million annual direct and indirect fiscal revenue for the city.

The increased economic flow that comes with a facility of this size will include ancillary benefits from the team moving to the area. That includes real estate and local business contracts to run and maintain the facility. The increased visibility for the city also was a key benefit mentioned.

“This is an opportunity to take the city of Henderson to a new level,” Assistant City Manager Greg Blackburn said. “It’s hard to put a dollar value to what this does to help us for the future. It will help accelerate the development in west Henderson and will give Henderson an advantage on future economic opportunities.”

There was very little opposition to the sale, much of it limited to emails sent for public comment. Clearly, an overwhelming majority see it as a big win for the city and its development on the west side.

It, again, underscores the Raiders desire to build the best facilities in the league in its soon-to-be new hometown. In addition to its new stadium at Russel Road and Interstate 15, this new facility shows the team’s commitment to Nevada. It is anticipated the Raiders will hold their preseason camps in Reno as well. While the team will be based and play in southern Nevada, owner Mark Davis and the club are committing heavily to the entire Silver State.

The Henderson City Council will formally vote on the sale at its February 6th regular meeting.