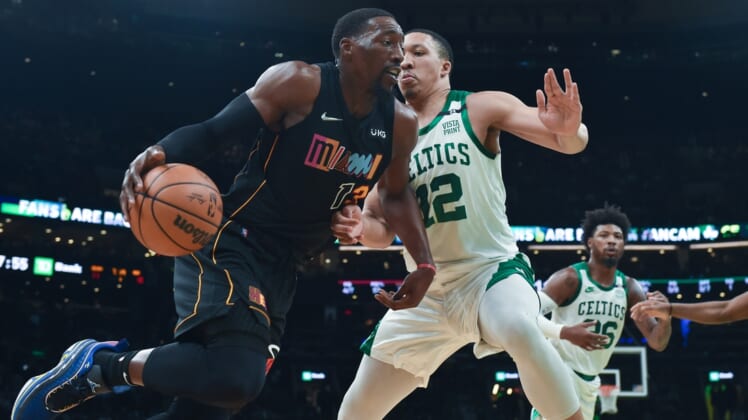 Bam Adebayo added 17 points and a team-high 12 rebounds as Miami outscored Boston 27-15 in the fourth quarter.

Miami (49-28) kept its narrow one-game lead in the Eastern Conference over the Milwaukee Bucks. Boston (47-30) and the Philadelphia 76ers both trail Miami by two games.

Also for Boston, Al Horford had a game-high 15 rebounds, and Marcus Smart had a team-high eight assists. Smart was ejected with 10.8 seconds left in the game.

Boston used a 9-0 run to end the first quarter with a 29-25 lead. That run was interrupted by Miami’s Tyler Herro, who hit a 3-pointer at the quarter buzzer. The Celtics had an 8-0 advantage on points off turnovers, and they got 11 points from Brown.

Miami closed the second quarter on a 9-1 run, taking a 53-52 lead into halftime.

After a Tatum layup, Boston was trailing 102-98. Then, with 35 seconds left, Miami’s Max Strus drew an offensive foul on Tatum. Boston challenged, but the call stood after a video review.

“It felt like a playoff game,” Strus said after the game.