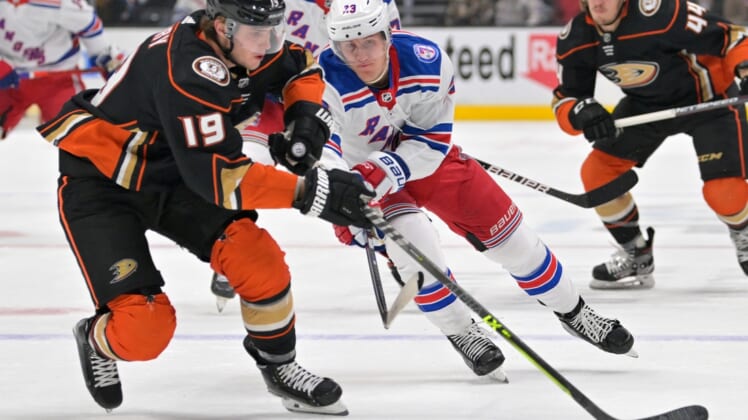 The Anaheim Ducks are getting close to being whole again.

They’re expected to have leading goal scorer Troy Terry and veteran defenseman Cam Fowler back when they open a five-game trip Monday night against the Boston Bruins.

Terry has missed the past four games and Fowler the past three while in the NHL’s COVID-19 protocol.

Anaheim also might get Adam Henrique back in the lineup after he missed the past 18 games with a lower-body injury. Henrique is on the road trip and skated with the team on Sunday.

Josh Manson and Anthony Stolarz were still in protocol as of Sunday, as well as Ducks head coach Dallas Eakins, who missed the 5-1 win against the visiting Tampa Bay Lightning on Friday.

“Every day we test, we cross our fingers and hope everything turns out to be negative,” Ducks assistant coach Mike Stothers said.

The Bruins breathed a sigh of relief when their leading scorer, Brad Marchand, returned to the lineup Saturday night against the Winnipeg Jets after suffering an upper-body injury in the second period Thursday against the Washington Capitals.

Marchand did not return during the Bruins’ 4-3 win and wasn’t expected to play against the Jets.

Marchand leads the Bruins in goals (20), assists (24) and points (44), but he’s not the hottest player for Boston in January.

David Pastrnak has 11 goals in 12 games this month, the fourth time he has scored at least 11 goals in a calendar month during his NHL career.

Pastrnak scored the go-ahead goal early in the third period against the Jets on Saturday night, giving him three goals in the past two games.

“If you want to be a good team, you need contributions from everyone,” Boston coach Bruce Cassidy said. “It’s always good for team building and success when different lines contribute.”

The Ducks will try to counter Boston’s offensive skill with goalie John Gibson, who played one of his best games of the season in the win against the Lightning on Friday, getting 32 saves.

“He’s elite,” Derek Grant said of his teammate. “There’s a reason he’s an All-Star, and he deserves to be probably every year. Even when we’re not winning games, he’s still standing on his head. It takes a team effort to play in front of him and reward him with some goals like we did (against Tampa Bay).”

Gibson also is the main reason the Ducks have the third-best penalty-kill unit in the league at 86 percent. Anaheim killed all seven penalties against the Lightning.

“Your goalie has to be the best penalty killer,” Stothers said.