Back to Where it all Started for Harbaugh and the 49ers

For the first time since the 2011 season, the San Francisco 49ers will be taking on the Philadelphia Eagles in a regular season game.

A lot has changed from the last meeting between these two teams. But in many ways, the 49ers are in the same position they were some three years ago to the week.

Then in his first season as the 49ers head coach, Jim Harbaugh was in the process of attempting to rebuild an organization that had failed to finish over .500 in each of the eight years before he took over. 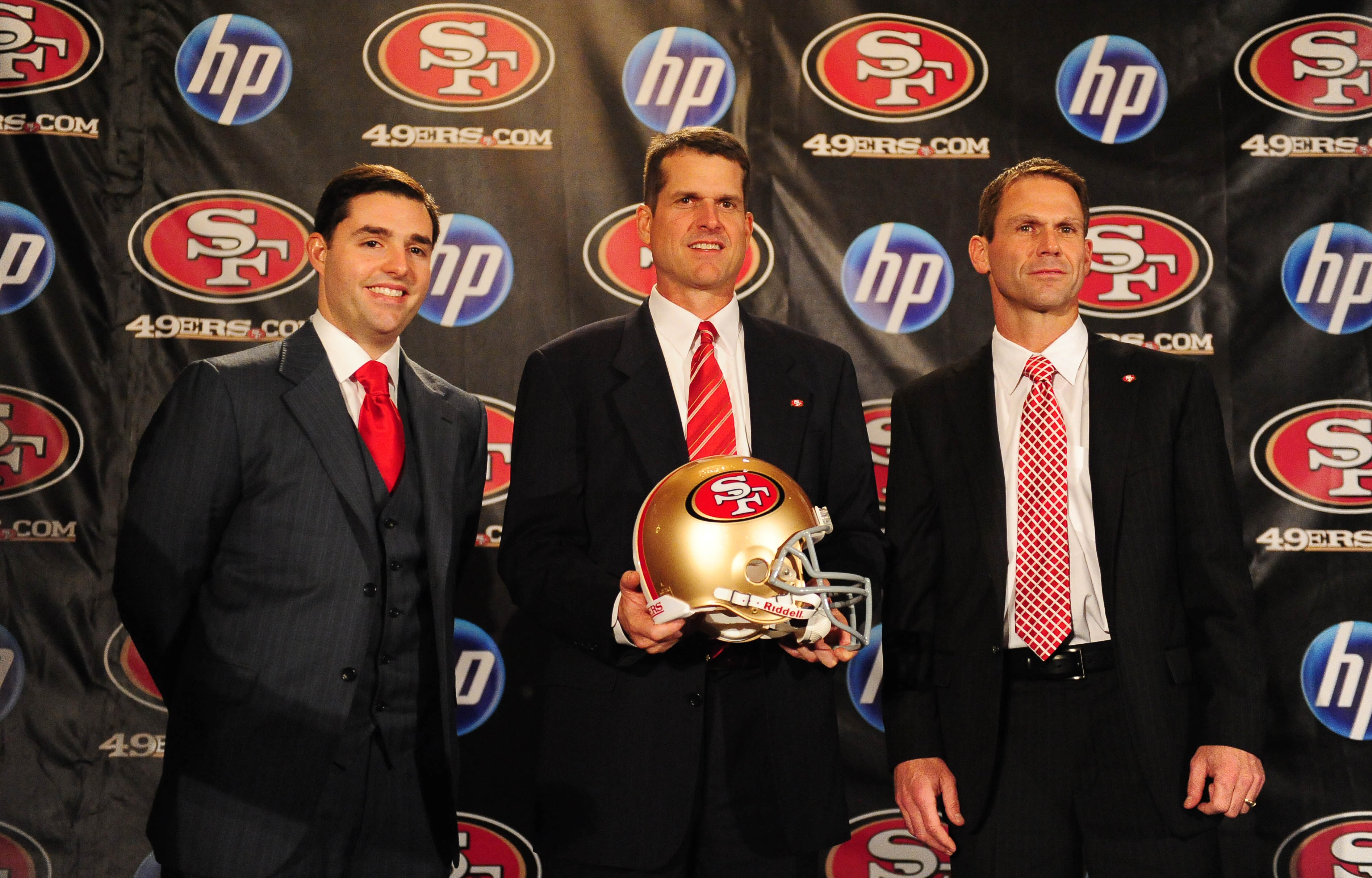 Courtesy of USA Today: No one expected immediate success when the 49ers hired Harbaugh in 2011.

With no success in sight and still scrambling to find relevance in the modern NFL, the 49ers headed into the season with a ton of question marks. Expectations were quieted a great deal heading into the 2011 season, especially considering the 49ers, like all 32 teams, were just coming off a lockout-shortened offseason that disabled his ability to implement his new scheme and a new winning mentality.

It was Week 4 of the 2011 campaign that San Francisco headed to Philadelphia in order to take on the self-anointed “Dream Team.” Even at 2-1 and coming off a hard-fought win over the Cincinnati Bengals the previous week, no one expected San Francisco to come into Philadelphia and compete. 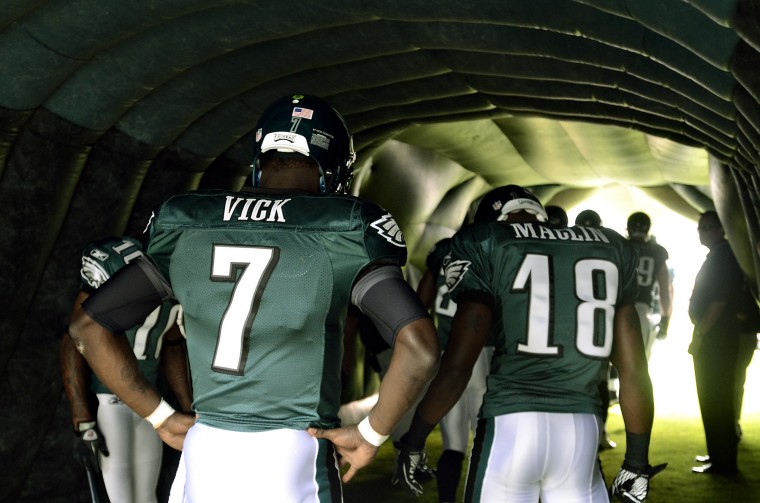 Courtesy of Eagles.com: Back in 2011, no one thought the 49ers had a shot against Philadelphia.

The game started as many people expected for the 10-point road underdogs. Philadelphia put up a 20-3 halftime lead on a five-yard touchdown pass from Michael Vick to LeSean McCoy with less than a minute remaining in the first half.

What transpired at halftime in the 49ers locker room changed the dynamics of the 49ers organization for years to come. What happened on the field in the second half, created the 49ers team that we have seen make it at least to the NFC Championship game in each of the last three seasons.

For all intents and purposes, this one game, nearly three years to the week later, really began the Harbaugh era in San Francisco.

After Philadelphia added on a field goal for a 23-3 lead, the 49ers responded by scoring three consecutive touchdowns for a 24-23 victory.

To this day, some 49ers players point to this single game as what turned around the franchise. These players, many of whom were members of the Nolan and Singletary-led squads of previous seasons, noticed a change within the culture of the organization.

Prior to the team’s appearance against the Baltimore Ravens in Super Bowl XLVII following the 2012 regular season, Pro Bowl defensive lineman Justin Smith had this to say about the Eagles game from 2011 (via Niners Nation).

We go to Philadelphia, they are up 20-0 at halftime, and we are able to come back. I think it just kind of cemented this group, like ‘OK, we’ve got something here, let’s keep rolling. We are not feeling our way through the season anymore. We are starting to believe.’ That winning attitude starts coming out.

Patrick Willis, who was drafted by the 49ers during the Mike Nolan years back in 2007, agreed with Smith’s sentiments.

For some reason, that locker room (halftime of the Eagles game), the coaches and the players came in and we were all like, ‘We’ve got ourselves in this. We have to get ourselves out.’ Coach Harbaugh was like, ‘They said it wasn’t going to be easy, but we don’t like easy. We got ourselves down we have to fight out of it.’ Our defensive coordinator, Coach (Vic) Fangio came in. He had every reason to go crazy on us. He said, ‘Guys you know what we got to do. Just calm down. Settle down and let’s go play.’

I just remember sitting back and watching him and being like, ‘Wow.’ Whether we lost that game or won that game, to me, just to have that was amazing. Fortunately, we were able to go out there and win that game. Which put in more perspective the kind of leadership we have within our head coach and other coaches.

The win against Philadelphia represented the second straight 49ers victory in a streak that would extend eight games before a Thanksgiving night loss to the Baltimore Ravens.

You pretty much know the story from there. San Francisco fell to the New York Giants in the NFC Championship game that season before earning its first trip to the Super Bowl since 1994 the following year.

Now, less than a calendar year removed from falling in heart-breaking fashion to the Seattle Seahawks in the NFC Championship game this past January, the 49ers find themselves at a crossroads. 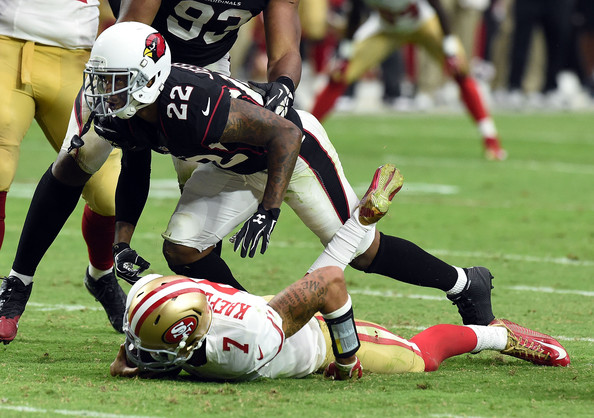 Courtesy of Zimbio.com: After falling flat on their face last week, the 49ers are in must-win mode.

They are 1-2 on the season and will be tasked with taking on a 3-0 Philadelphia Eagles team at Levi’s Stadium on Sunday. A stadium no one could have imagined would have been built the last time these two teams played. And in a game that the 49ers must win in order to avoid falling to two games under .500 for the first time in the Harbaugh era.

This crossroad isn’t that much dissimilar than where the 49ers were back in 2011 when they were down 20-3 at halftime againt the then Andy Reid-led Eagles.

Many in the NFL world have written this team off. Some indicate that they’re in the midst of a dramatic regression from the championship contending teams of the past three seasons. Others conclude that the 49ers players just don’t have the same passion to play for Harbaugh as they had in the past. Meanwhile, others indicate that San Francisco is an undisciplined team, both on and off the field. 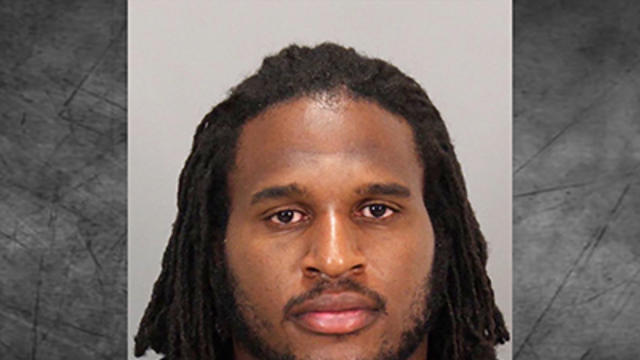 Harbaugh’s squad is less than a month removed from the most drama-filled offseason in the recent history of the franchise. From all of Aldon Smith’s off-field issues and the Colin Kaepernick situation in Miami to Ray McDonald’s domestic violence arrest prior to Week 1, the offseason just didn’t treat this franchise too well.

And on the field, it hasn’t been too much better.

Following a dominating Week 1 victory over the Dallas Cowboys, San Francisco has lost two consecutive games and has failed to score a single point in the fourth quarter all year. Over the course of the last two games, everything that could go wrong has gone wrong. The 49ers racked up 25 penalties for 225 yards, while continually losing their composure on the football field. In a sign that this veteran-laden group is frustrated, the on-field lack of composure has seeped into the locker room with the likes of Anquan Boldin blaming officiating for the losses. While the officiating has been a dumpster fire over these past two games, the 49ers have only themselves to blame for a 1-2 start.

That much must be noted.

Unlike in 2011, the 49ers are in a NFC West division that is the strongest in the NFL. If you remember correctly, the 2011 version of this division was coming off a season that saw Seattle earn the top spot by winning just seven games.

In this, and with expectations still high in the Bay Area, Sunday’s game against Philadelphia has become a must win. No team can afford to fall to 1-3 in the NFL. That’s only magnified with the Seattle Seahawks and Arizona Cardinals in the NFC West.

As we look back to 2011 for a bit today, Week 4 of that season gave the 49ers an identity. An identity that was defined by hard-nosed football, a physical mentality and solid all-around play on both sides of the ball. One week removed from coming out against the Cardinals in five-wide, hurry-up sets, the 49ers appear to be a team that’s losing it’s identity. Or, at the very least, looking to acquire a new identity.

In order to regain that identity and swagger on the football field, Harbaugh’s squad must come out in front of their home squad at Levi’s on Sunday and hit the Eagles in the face. They need to rekindle the bullying mentality that we have seen in each of the past three seasons.

It’s called getting back to the basics, understanding where your team is and moving forward with the knowledge that you are still among the most-talented overall units in the league.

Defeating an Eagles team that seems to be the “sexy pick” around the NFL won’t be enough. Taking it to the Eagles with a combination of physicality and big plays will lead to a quieted group of skeptics that have been as loud this week as ever before. And only then, can the 49ers turn the page from these past couple weeks and look forward to a season that started with high expectations. If not, this game may mark the end of what started against Philadelphia just three years ago.