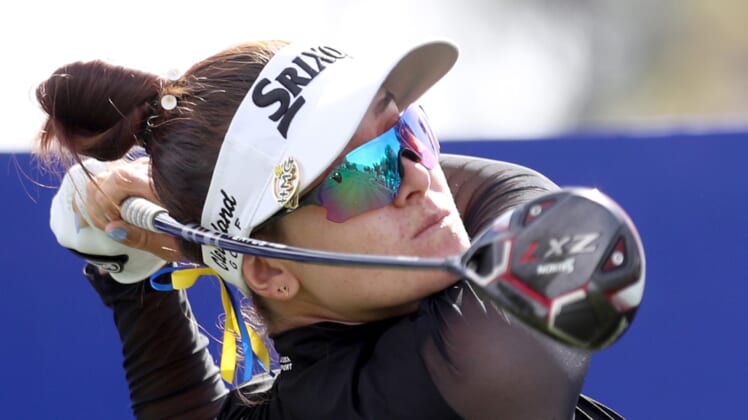 Australia’s Hannah Green made back-to-back birdies three times while grabbing the first-round lead on Wednesday at the Lotte Championship in Ewa Beach, Hawaii.

Defending champion Lydia Ko of New Zealand is tied for 11th at 69 along with Taiwan’s Min Lee.

Green had three birdies and no bogeys on the back nine before an eventful run through the front nine. She had no pars from No. 2 to No. 8, making five birdies and two bogeys in that span.

“I’ve been hitting the ball good,” said Green, whose two LPGA event championships both came in 2019. “I just felt like with the putter I just needed to see a couple go in, so that’s kind of what led to my score today. Holed a couple longer ones, which is nice. Just made the hole feel a little bit bigger.”

Regarding the conditions at the Oahu course, Green said, “I feel like the windier it gets and the harder it gets, I like that. I feel like I like the challenge. I might not say that tomorrow if I have a bad score, but, you know, it makes you think.”

Ashok, who is looking for her first career LPGA win, birdied the second, third and fourth holes and closed with birdies at Nos. 17 and 18.

“I think when it got windy, just took me a bit of time to get used to it,” Ashok said. “I think from 10 to like 17, really, I didn’t have any good looks at birdie. I was just kind of scrambling, which is fine, because you expect that in the wind.

“Yeah, it was nice to finish with a couple birdies there, but … definitely looking forward to (Friday).”

The 10th edition of the event is being played at Hoakalei Country Club for the first time. It was held at Kapolei Golf Club last year following eight years at Ko Olina Golf Club.