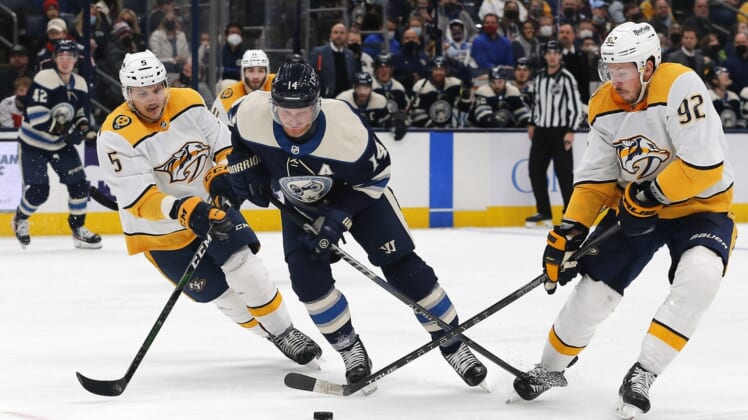 Gustav Nyquist scored the winner in the fifth round of the shootout to give the Columbus Blue Jackets a 4-3 victory over visiting Nashville Predators on Thursday night.

Nyquist fired a wrist shot past the glove side of David Rittich leading off the fifth round. Eeli Tolvanen then nearly tied it for Nashville, but his backhand shot caromed off the right post.

Boone Jenner had a goal and an assist and Patrik Laine and Alexandre Texier also scored for Columbus, which was playing its first game since Dec. 16. Elvis Merzlikins finished with 31 saves for the Blue Jackets.

Nashville, playing the second game of a road back-to-back that began with a 5-3 loss at Washington on Wednesday, jumped out to a 1-0 lead at the 2:50 mark of the first period on McCarron’s third career goal and first since Jan. 7, 2017, as a member of the Montreal Canadiens. Matt Luff set up the score with a pass from along the right boards to McCarron in the slot, where he fired a wrist shot over Merzlikins’ glove.

Columbus tied it a few minutes later when Jenner deflected Vladislav Gavrikov’s shot past Rittich for his 12th goal of the season.

Laine, back after missing 19 games with an oblique injury, gave the Blue Jackets a 2-1 lead 24 seconds into the second period with his fourth goal of the season, finishing a give-and-go with Jakub Voracek and tucking in a shot into the left side of the net a split second after the far post had been dislodged by Rittich.

But Nashville regained the lead near the end of the period with two goals in the span of 35 seconds. Cousins got the first with a sharp angle shot from along the left baseline that caromed in off the right shoulder of Merzlikins for his fourth goal of the season. Johansen then made it 3-2 with a power-play goal, jamming in a rebound of a Duchene shot for his ninth goal of the season.

Texier tied it at 3-3 with 6:27 to go in the third period when he intercepted a pass near the top of the right circle and then ripped a shot past Rittich’s blocker side for his 10th goal of the season.