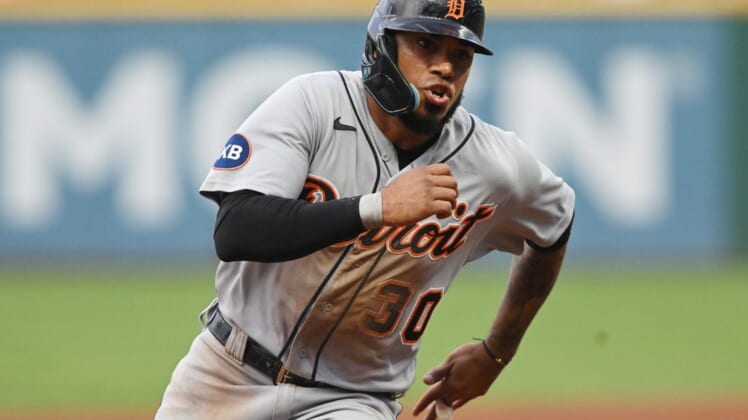 All-Star second baseman Andres Gimenez drove in the tie-breaking run in a two-run rally in the seventh inning as the host Cleveland Guardians nipped the pesky Detroit Tigers 6-5 on Friday.

The Guardians trailed 5-4 entering the seventh against reliever Michael Fulmer.

Myles Straw, who reached base safely in his 12th consecutive game, walked to lead off the inning. He moved to third when Steven Kwan’s hit bounced over the head of first baseman Harold Castro and went for a double. Detroit manager A.J. Hinch walked Jose Ramirez intentionally to load the bases.

Josh Naylor’s sacrifice fly drove in the tying run, and Gimenez blooped a single in front of Detroit left fielder Robbie Grossman, to score Kwan. Gimenez is now 28-for-73 (.384) this year with runners in scoring position.

Trevor Stephan earned his second save with a scoreless ninth. Closer Emmanuel Clase wasn’t available after pitching in three of the last four days.

The Guardians wasted no time getting to Tigers starter Drew Hutchison. Kwan drew a leadoff walk and moved to second on Amed Rosario’s single. Ramirez drove in Kwan with a single, good for his AL-leading 70th RBI.

Naylor drove in Rosario with a groundout to second for a 2-0 lead. After Gimenez struck out, Owen Miller’s booming triple off the wall in center scored Ramirez for a 3-0 advantage.

However, Cleveland starter Zach Plesac gave it all back — and more.

Riley Greene drove in the Tigers’ first run with a two-out solo homer off Plesac in the third. It was his second home run of the season and traveled an estimated 386 feet.

Jonathan Schoop hit a bouncer back to Plesac, who turned and threw to shortstop Rosario to start a double play, but he wasn’t covering second, and everybody was safe. Grossman then singled to load the bases.

Greene, who struck out four times on Thursday, followed with a two-run double for a 5-3 advantage.

The Guardians inched closer to Detroit in the bottom of the fourth when Gimenez singled, moved to second on a walk to Miller and scored on Austin Hedges’ single to make it 5-4.

In his two-third of an inning, Fulmer (2-4) allowed two hits, two runs and two walks. He struck out one.