Guardians look to remain on a roll in series vs. Rangers 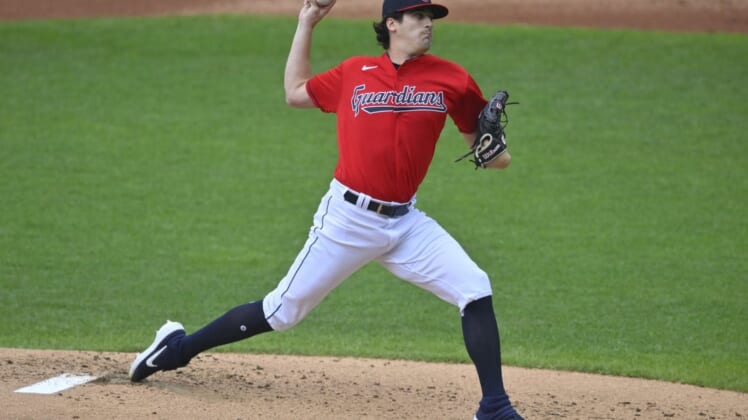 The Cleveland Guardians are surging after winning two of three games in Baltimore over the weekend.

The Guardians won the rubber match of the series 3-2 on Sunday and have won six of their past eight games.

Cleveland will host the Texas Rangers on Monday night in the start of a seven-game homestand.

The Rangers lost two of three games against the Seattle Mariners over the weekend. Texas lost 6-5 in 10 innings on Sunday after its bullpen allowed three runs in the ninth inning.

Cleveland will start right-hander Cal Quantrill (2-3, 3.52 ERA) in the opener against Texas. He has two previous outings against the Rangers and hasn’t given up an earned run.

Heading into Sunday’s game, the Guardians’ pitching staff had a 2.71 ERA in its last 17 games (since May 14). That’s the fourth-best mark in the majors.

The starting rotation has a 3.02 ERA in that span.

Zach Plesac pitched six innings and allowed four hits, two runs and no walks against the Orioles on Sunday. The right-hander struck out eight.

“We’re feeding off each other,” Plesac said of the starting rotation. “We’re starting to find our groove. It’s important to keep hammerin’ away.”

The Cleveland bullpen owns a 1.93 ERA since May 14, the best mark in baseball, ahead of Atlanta’s 2.10 ERA. Guardians relievers have limited opponents to a .184 batting average, also tops in the majors.

Three Cleveland relievers followed Plesac on the mound Sunday and didn’t allow a hit in three innings. Most impressive was right-hander Eli Morgan, who threw 1 2/3 innings and pitched out of a jam with runners on first and second with one out in the seventh.

“That’s exactly what he is — a weapon,” Francona said.

Rangers third baseman Ezequiel Duran was promoted from Double-A Frisco in time for Saturday’s game. He was 0-for-3 with an error in his major league debut.

He more than made up for it on Sunday against Seattle, when he was 2-for-4 with his first major-league homer. Teammates Adolis Garcia, Marcus Semien and Mitch Garver also homered in the loss.

Texas brought Duran to the parent club when third baseman Josh H. Smith injured his shoulder against the Mariners.

“It was a great moment,” Duran said. “I’ve been waiting a long time for this.”

Smith was placed on the 10-day injured list. He was sitting in the clubhouse with a sling on his right arm.

“I don’t know how long (Duran is) going to be here, but he’s going to get a look there,” Rangers manager Chris Woodward said.

Texas outfielder Willie Calhoun was designated for assignment on Sunday. He was batting just .136 with one homer for the Rangers and had requested a trade.

“At some point, the opportunities run out,” Rangers president Jon Daniels said.

Calhoun was designated for assignment to make room on the 40-man roster for outfielder Steele Walker, whose contract was selected from Triple-A Round Rock.