Guardians erupt to score 17 runs in rout of Royals 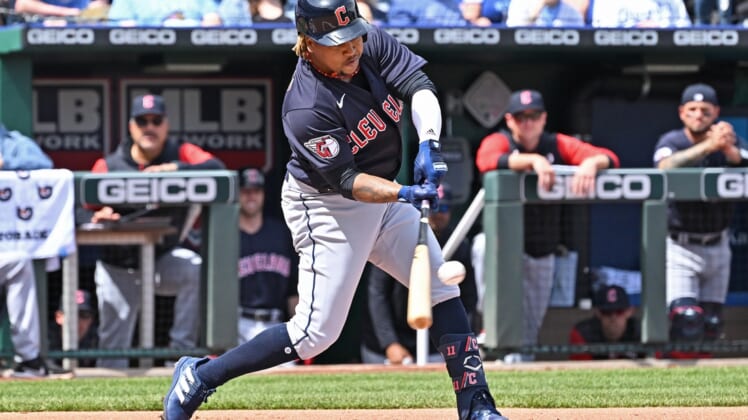 Oscar Mercado’s first career grand slam keyed a six-run first inning for Cleveland as the Guardians took out two games worth of frustration with a 17-3 victory over the Royals on Sunday afternoon in Kansas City. Mercado had a career-high five RBIs.

The Guardians, who scored just one run on 12 hits over 19 innings in losing the first two games of the series, had 13 runs and 16 hits in the first five innings. They finished with 22 hits.

Steven Kwan was 5-for-5 and scored four runs. He is 8-for-10, plus three walks, so far in his debut season. The eight hits are one shy of the MLB record for hits in a player’s first three career games, held by Coaker Triplett of the Chicago Cubs in 1938).

Cal Quantrill (1-0) cruised with a big cushion, limiting the Royals to two runs on four hits over five innings.

The Guardians scored a run in the first before Bubic could record an out. Myles Straw led off with a walk and Kwan singled. Jose Ramirez, who had the only Cleveland RBI in the first two games, stroked a single to left center to score Straw. After two popups, Owen Miller drove in Kwan with a single.

Bubic then walked Ernie Clement to load the bases and his day was done. Taylor Clarke relieved Bubic and gave up the grand slam to Mercado on a 3-2 pitch.

The Guardians got four more runs in the top of the second off reliever Jackson Kowar. Straw and Kwan singled and Ramirez walked, loading the bases with no outs. Amed Rosario singled in two runs and Miller doubled in two more.

The Royals finally got on the board in the third. Bobby Witt Jr.’s double drove in two runs.

The Guardians got those runs back in the fourth when Miller drove in his fourth run of the game and Mercado tripled for his fifth RBI. Rosario’s infield single drove in the 13th run in the fifth.