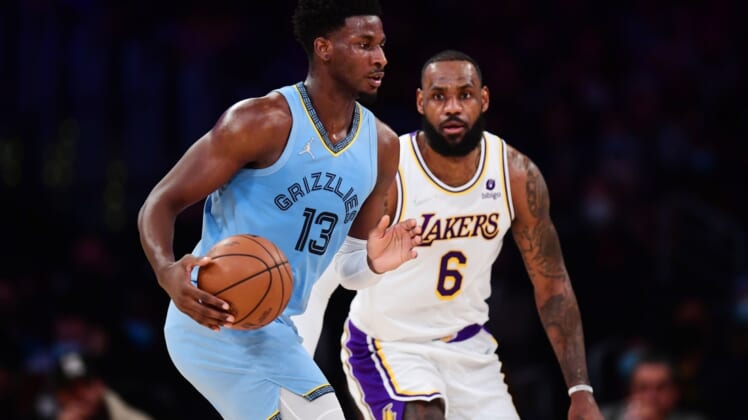 The visiting Memphis Grizzlies set a franchise record with their ninth straight victory in a 127-119 win against the Los Angeles Lakers on Sunday night.

Desmond Bane shot 5-for-8 from 3-point distance and scored 23 points to lead the Grizzlies.

Jaren Jackson Jr. added 21 points, 12 rebounds and six blocks, and Ja Morant finished with 16 points and seven assists after he sat out a 123-108 win at the Los Angeles Clippers on Saturday with a sore left thigh

LeBron James had 35 points, nine rebounds and seven assists for the Lakers, who came in riding a season-long four-game winning streak.

It was the 11th consecutive game that James scored at least 25 points. James, 37, is the oldest NBA player to accomplish that feat.

James departed with 7:58 left and the Lakers trailing by 27 points. The Lakers managed to cut the deficit to 126-119 with 1:16 remaining, forcing the Grizzlies to bring back their starters, who closed out the win.

The Lakers held their last lead at 27-25 when Russell Westbrook made an 18-footer with 1:21 left in the first quarter.

The Grizzlies tied it up at the end of the opening quarter and then scored the first five points of the second to move ahead 32-27.

The Lakers could only get as close as three in the first six minutes of the second quarter before Memphis began inching away and took its first double-digit lead at 58-47 on a tip-in by Jackson with 2:13 left in the first half.

The Lakers, meanwhile, shot 40 percent from the floor in the first half.

Things didn’t get any better for the Lakers in the third quarter.

Both teams traded baskets in the opening minutes before the Grizzlies used a 7-0 run to move ahead 80-58 with 8:02 left.

Memphis continued to expand on its advantage, taking a 107-83 lead into the fourth.

Austin Reaves and Wayne Ellington each scored 16 points off the bench for Los Angeles.