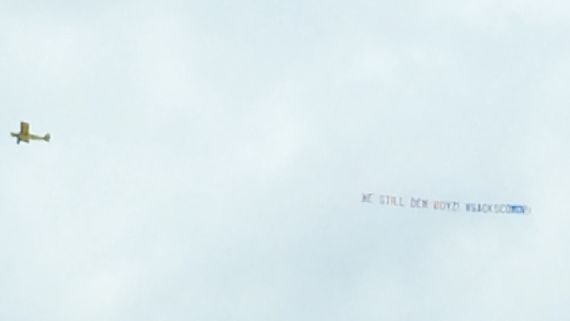 As many may remember, some Eagles fans had previously funded a similar stunt, sending a plane to fly over Cowboys practice in Oxnard, Ca. that read “WE’VE GOT DEMARCO” last week. Apparently, Hardy’s banner was sent up in direct retaliation for the effort, further stirring up a rivalry that needs no additional contention.

Of course, this is all in good fun, but not everybody was amused at Hardy’s gesture.

“A waste of money,” Eagles right tackle Lane Johnson said of Hardy’s gesture. “I think he’s a hothead and gets carried away with himself. He’s going to have his hands full with 71, I promise you that.”

Hardy and Johnson won’t have a chance to compete until later in the season, however, given the suspension issued by the league for the defensive end’s off-field actions last year.

These two NFC East rivals will square off in Week 2 when the Eagles will host the Cowboys on September 20 at Lincoln Financial Field. Then later in the year Dallas hosts Philadelphia On November 8, when Hardy can finally prove his point on the field.