Related: Three Green Bay Packers who could get traded during training camp

There have also been two instances in which a quarterback and running back each rushed for over 1,000 yards while playing on the same team. Michael Vick and Warrick Dunn accomplished the feat in 2006 while Lamar Jackson and Mark Ingram did it in 2019.

Aaron Jones and AJ Dillon will both rush for 1,000 yards this season

The Green Bay Packers are fortunate to have two running backs that could be starters on most other teams. Both Jones and Dillon are exceptional backs with two different running styles. They are a perfect compliment to each other. Indeed, both have the talent necessary to rush for 1,000 yards, as Jones has done twice in his career.

However, there are some factors that should make it possible for both of them to surpass 1,000 rushing yards in 2022. The first, of course, is the absence of Davante Adams in the Green Bay Packers offense. While the Packers are confident in their young wide receivers, it is not easy to replace a First Team All-Pro. It is very likely that the Packers focus more on the run. 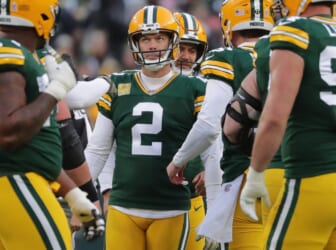 Both running backs have played games with the Packers in which Davante Adams was inactive. Aaron Jones, a five-year veteran, of course, has played in more of these games. In eight career games in which Adams was not active, Jones has 483 rushing yards for an average of 60.4 rushing yards per game. If he were to average that number of yards per game in a 17-game season, he would end with 1,026 rushing yards.

AJ Dillon has played just one game (in which he had meaningful snaps) without Davante Adams. That was last season against the Arizona Cardinals when Dillon had 78 rushing yards on 16 attempts. Now, one game is not a great indicator of how Dillon will perform without Adams in the offense. That being said, 78 rushing yards per game would have ranked sixth in the NFL last season and put him on pace for 1,326 yards per game.

As for AJ Dillon, he averaged 4.3 yards per attempt and 11.0 attempts per game in 2021. Many Packers analysts believe that Dillon may see more rushing attempts this season. If he were to get just three more attempts per game (14), and maintains a 4.3 yards average, he would be on pace for 1,023 yards in a 17-game season.

For the Packers, having two 1,000-yard rushers would be a change from the pass-dominant offense centered around Aaron Rodgers. However, it may be a welcomed change, especially if it leads to more wins in the playoffs.