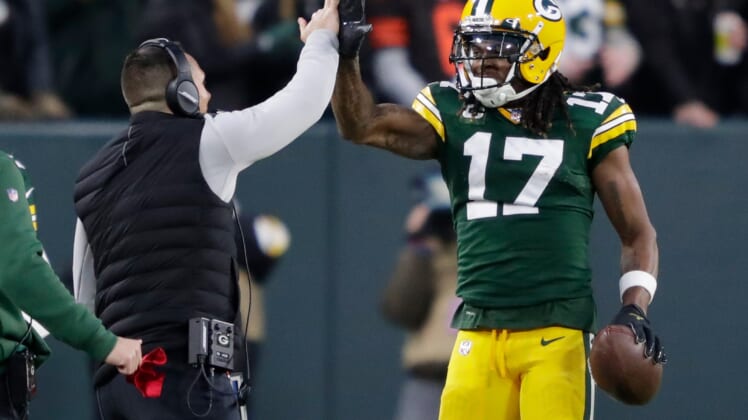 It looks like the Green Bay Packers are getting the gang back together. First Aaron Rodgers agreed to the largest contract in football history. Now, the Packers are ensuring the four-time NFL MVP still has his favorite target in 2022 as well, by placing the franchise tag on Davante Adams.

According to Tom Silverstein of the Milwaukee Journal Sentinel, Adams has been informed by the team that they are placing the tag on him.

It has been believed that Adams won’t necessarily appreciate being tagged, but now with Rodgers in town for up to another four years, coming to terms on a long-term extension with his top target should come a bit easier.

While Adams has been slapped with the tag, for now, there is plenty of time before the season begins to agree to a bigger extension, which is likely what all parties involved would like to do.

For the record, the franchise tag amount for wide receivers is $18.4M for the 2022 season. Getting Adams for just that amount would be a steal, but that’s likely why he wants to negotiate his own contract.

Meanwhile, for the Packers, they can relax knowing the heavy work of their offseason is done, getting their two best players under contract, but that doesn’t mean there aren’t still plenty of other decisions to be made over the next few months.

Don’t be surprised to still see general manager Brian Gutekunst come to terms on a bigger agreement with Davante Adams, but that’s merely the tip of the iceberg.

They still need to clear cap space, find out which other pending free agents they’d like to retain, and who knows, maybe Jordan Love gets dealt elsewhere with Rodgers basically planning to retire a Packer.

While these two recent moves are massive steps in the right direction to help the Packers compete in 2022, most anticipated them to happen. Now the real fun begins.