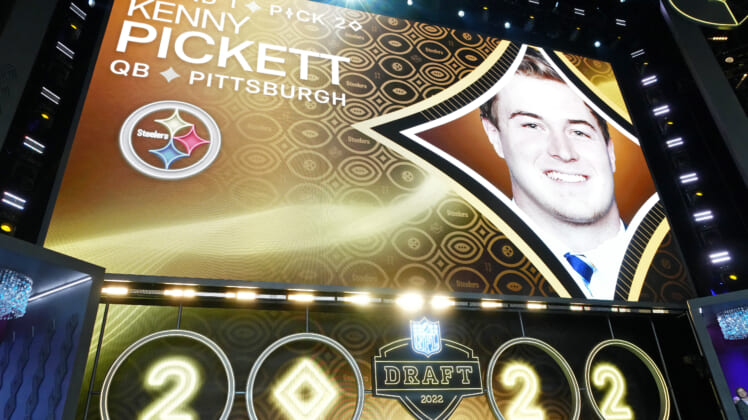 To say that the Pittsburgh Steelers crushed the 2022 NFL Draft in general manager Kevin Colbert’s final run with the team after 22 seasons is an understatement.

They entered Day 1 with the 20th overall selection, with many anticipating the top quarterbacks to go off the board before it was their turn on the clock. That’s not what happened at all, with Pitt’s Kenny Pickett lasting all the way until the Steelers were on the board. By landing their top-rated quarterback prospect, the organization was likely doing cartwheels in the draft room, Mike Tomlin included.

While Pickett steals the headlines of the draft class, the Steelers actually made several other moves to help improve the depth chart on their roster ahead of the 2022 season. Here we grade their picks and their draft in its entirety.

Kenny Pickett was a Steel at No. 20

What’s not to like about having your top-rated quarterback prospect fall right into your lap all the way down to pick No. 20? Pickett was described as the most pro-ready QB in the draft class and even if the Steelers are sold on Mitch Trubisky, you can’t blame them for taking a chance on another prospect with sky-high potential.

This offseason owner Art Rooney II and coach Tomlin spoke about wanting to find a quarterback with some mobility, they did just that by adding both Trubisky and the sneaky-athletic Pickett. It doesn’t matter if he sees the field right away in Blitzburgh or not, they now have a potential QB of the future and that should be seen as a major win.

Steelers take George Pickens at No. 52

Following the theme of their draft, seeing George Pickens still on the board at No. 52 is asinine. Some, like Pro Football Focus, say Pickens has the best hands of the incoming receiver class. It doesn’t matter who’s under center, building a more reliable receiving corps is key to making this offense take off. We saw way too many drops from Steeler receivers a year ago, maybe Pickens can help put a stop to that madness. He joins a strong group led by Chase Claypool and Diontae Johnson and has a chance to receive an immediate role in 2022.

One can never have enough rotational defensive linemen to keep the legs fresh for all four quarters. Over the years the Steelers have done a great job of identifying lesser-known players, fitting them into their defensive front, and watching them thrive. DeMarvin Leal, once seen as a potential late-first round prospect is a versatile athlete who can play defensive tackle or slide out to end.

No one is taking the jobs of Cam Heyward, Tyson Alualu or Stephon Tuitt, but Leal can help backup all three of them and now is in line to someday replace them as well. Tuitt at 28, is the youngest of the group, while Heyward (33) and Alualu (34) aren’t getting any younger. Leal can learn on the job while not being expected to fill a major role right away.

Other Steelers picks in 2022 NFL Draft

It’s hard not to love what the Steelers did, adding a quarterback who can someday be the face of the franchise, if not right away while adding weapons to help him grow and develop chemistry with. They got incredible value with each of their first four picks and added depth later on. Even though they didn’t have a ton of draft capital and had to pick late in each round, the Steelers did extremely well.