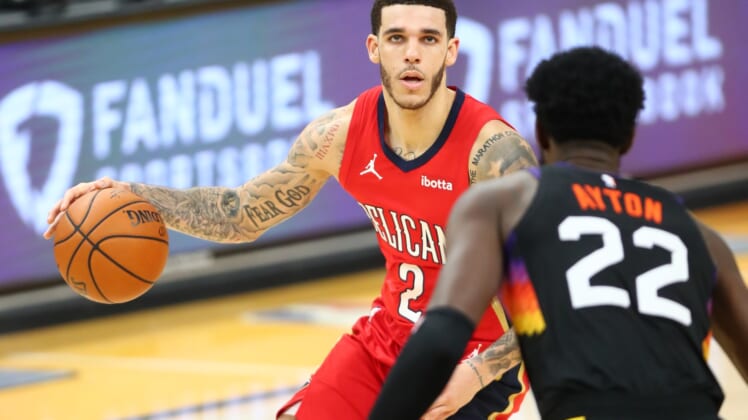 There’s been some speculation about a Golden State Warriors trade ahead of the 2021 NBA trade deadline on March 25. Even without an injured Klay Thompson in the mix, the Warriors have started out the season in surprising fashion and are currently in playoff positioning.

We previously focused on how the Warriors’ brass owes it to Stephen Curry to pull off a blockbuster trade. It’s not yet known whether that’s even possible leading up to the deadline. What we do know is that Golden State will likely pull off one notable trade. Here’s a look at five potential Golden State Warriors trade scenarios ahead of the NBA trade deadline.

It’s not a secret that Golden State needs to upgrade at point guard behind Stephen Curry. Jeremy Lin could be an option with the veteran currently in the G-League. Former first-round pick Jordan Poole has also been showing out in the Orlando bubble. However, offseason free-agent signing Brad Wanamaker just has not panned out behind Curry.

Recently acquired by Detroit in the Derrick Rose trade with the New York Knicks, Smith Jr. would act as a marginal upgrade over Wanamaker. He’s averaging 7.8 points and 3.3 assists in 10 games with Detroit. Sure the impending free agent has not morphed into a star many had thought when the Mavericks made him a first-round pick in 2017. But he’s still only 23 years old and offers upside.

From Detroit’s perspective, Smith Jr. was a salary addition to the Rose trade. He’s unlikely to have a long-term future with the Pistons given Killian Hayes’ status on the roster. Getting a second-round pick as an extension of the Rose deal could make some sense for the rebuilding team.

The idea of bringing McGee back after he helped the Warriors to back-to-back NBA titles has to be enticing to general manager Bob Myers. He could act as a more efficient veteran tutor to rookie No. 2 pick James Wiseman in comparison to Kevon Looney. The Warriors’ ability to have three natural big men moving forward could also loom large in the Western Conference.

McGee, 33, is averaging 7.3 points and 5.1 rebounds on 47% shooting from the field for the Cleveland Cavaliers this season. He would be able to provide immediate offense for the second unit. As for Cleveland, picking up a young guard in Poole and a future second-round pick would be seen as a boon.

Tucker has been bandied about in NBA trade rumors for some time now. Previously seen as a three-and-D wing, Tucker has struggled under new Rockets head coach Stephen Silas. He’s averaging a mere 4.5 points and 4.7 rebounds on 37% shooting from the field this season. A change of scenery could be in the cards here.

As for Tucker and his fit in Golden State, the ability to play three frontcourt positions could loom large. Remember, he shot 37% from three-point range from 2016-20. That’s something the Warriors don’t have at the four with Draymond Green and Eric Paschall struggling from distance.

Houston’s asking price of two second-round picks could work for Golden State. It would also be able to add Tucker’s salary via the Klay Thompson injured-player exception.

Prior to Ball and Kelly Oubre upping their games in recent weeks, this was the talk of the NBA water cooler. A Warriors trade consisting of them bringing in Ball to team up with Stephen Curry in the backcourt. Honestly, it just makes too much sense. It would also create a tremendous starting-five with Curry, Ball, Andrew Wiggins, Draymond Green and James Wiseman.

An impending restricted free agent, Ball has picked it up big time recently after some initial struggles. He averaged 16.6 points, 4.5 rebounds and 5.8 assists on a resounding 46% shooting from distance in February. Add in Curry’s MVP-caliber performance this season, and that would be a dynamic backcourt.

As for the Pelicans, they get a look at another impending free agent in Oubre. He can slide in to a more traditional two-guard role after New Orleans struggled pairing two point guards in Ball and Eric Bledsoe together. Still only 25, Oubre averaged 20.1 points and 6.4 rebounds on 50% shooting in February. This hypothetical trade also includes New Orleans picking up two valuable draft picks and a young guard in Jordan Poole.

Let’s be clear for a second. There will be a Warriors trade here in the not-so-distant future that can be considered a blockbuster. They are not going to wait around to see their aging core group waste away as other top-end contenders out west continue to dominate the landscape.

While a trade of this ilk likely won’t happen during the summer, expect Golden State to kick the tires on adding LaVine should he be made available. The All-Star has been absolutely dominant this season, averaging 28.7 points to go with 5.2 rebounds and 5.0 assists on 52% shooting. He’d slot in at the two until Thompson returns next season before likely taking over for Andrew Wiggins at the three– leading to Wiggins taking over as a top-end Sixth Man.

As for the Bulls, NBA rumors have consisted of them looking to move LaVine. There’s no telling whether he has a long-term future in Chicago. Getting a look at Oubre over the next couple months could help. Adding a tremendous young player in Paschall would be a boon. Meanwhile, one of the three first-round picks Chicago acquires in this hypothetical trade would be the Timberwolves’ top-three protected selection in 2021 (unprotected in 2022). A nice haul.