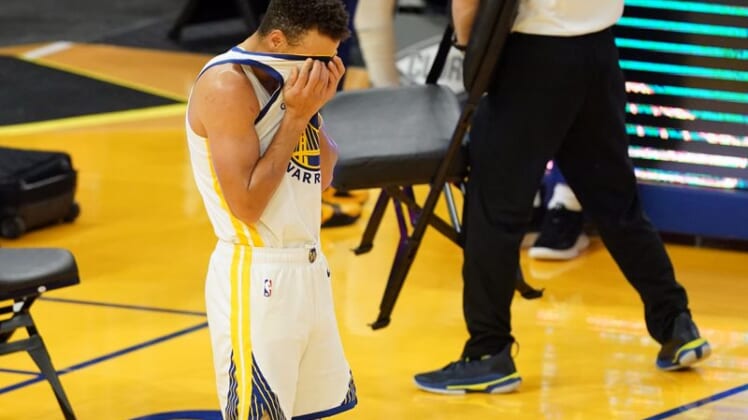 There’s certainly been rumors about a potential Golden State Warriors trade ahead of the March 25 deadline. For good reason. They sit at 13-12 on the season and as the eighth seed in the Western Conference despite Klay Thompson’s Achilles’ injury.

Stephen Curry is playing at the highest level of his career after missing all but five games a season ago to injury. Shockingly, Andrew Wiggins has morphed into a tremendous all-around player since the trade that brought him to Golden State a year ago this month.

Even then, there’s a lot missing on this Warriors roster. It’s nowhere near the level that we saw in the Bay Area during Golden State’s five consecutive NBA Finals appearances last decade. It’s also now time that Warriors general manager Bob Myers pulls off a blockbuster trade to give Stephen Curry more help. Here’s why.

Stephen Curry is playing the best basketball of his career

This would represent Curry’s best statistical performance since he led Golden State to 73 wins back in 2015-16 — one year before Kevin Durant arrived in Oakland. Overall, the numbers are absolutely staggering.

Following Golden State’s blowout win over the San Antonio Spurs on Tuesday, opposing players talked much more about an individual player than the Warriors team as a whole.

“Thankfully we won’t be seeing Stephen Curry on this upcoming road trip. He is great great great,” Dejounte Murray said. “It’s hard to game plan against him.”

For good reason. In the final three games of the Warriors’ trip to Texas, Curry averaged 40.3 points on 53% shooting from distance. That included a 57-point performance in a loss to the Dallas Mavericks. All said, Curry finished plus-24 in those three games despite Golden State losing two of three.

The Warriors’ ownership group of Job Lacob and Peter Guber have made it clear that they will spend money. In fact, the off-season acquisition of Kelly Oubre cost Golden State $80 million despite the fact that he boasts a mere $14.4 million salary. That’s because the team is a repeat luxury tax offender.

The Golden State Warriors don’t care. Even with the economic downturn created by the COVID-19 pandemic, this team is more than willing to spend ahead of the March 25 NBA trade deadline.

They also have the assets to pull off a blockbuster trade. That includes the Minnesota Timberwolves top-three protected pick in 2021 (unprotected in 2022) and Oubre’s expiring contract. As it relates to the Wolves’ pick, it is the most-valuable draft pick trade asset in the NBA today.

The Warriors can pull off a blockbuster trade within the next few weeks without giving up their most-coveted asset, rookie No. 2 pick James Wiseman.

Multiple draft picks and Oubre’s expiring as well as a young player or two could net this team a Zach LaVine or DeMar DeRozan. Thinking bigger picture, the ability to even place a call to the Washington Wizards for Bradley Beal with Wiseman and the Wolves’ pick as the centerpieces is a real possibility.

Either way, Stephen Curry has been the face of these Golden State Warriors since he was a skinny first-round pick back in 2009. He lifted this organization up from the doormat of the NBA, a true laughingstock.

He’s legitimately one of the primary reasons they are one of the top-three most-valuable franchises in the Association and just moved into a beautiful arena in San Francisco.

It’s time the Warriors pay him back by continuing to do everything possible to build a contender moving forward. Because, right now, these Warriors are nothing more than a bottom-two seed in the Western Conference despite another historical performance from the all-time great.