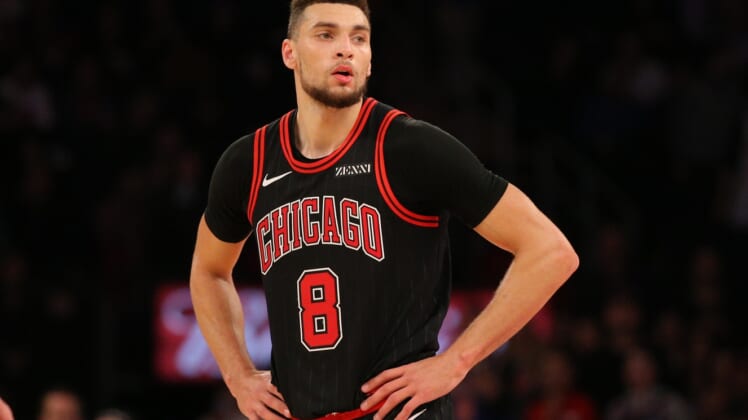 The New York Knicks have exceeded expectations already this season and with the NBA trade deadline approaching, one of the league’s most iconic franchises could finally put its trade assets to use. As NBA rumors begin to swirl around potential stars on the move, the Knicks are unsurprisingly at the forefront of talk.

We’ve already seen one blockbuster deal this season, the incredible James Harden trade to the Brooklyn Nets. While many teams have their eye on Washington Wizards superstar Bradley Beal as the next to be dealt, the Knicks may be interested in a top guard who Tom Thibodeau would know well.

Not many NBA teams surpass the war chest of trade assets the New York Knicks could offer to a rebuilding team. The Kristaps Porzingis trade, along with some additional wise moves in recent years, puts New York in a nice spot for when a marquee player becomes available.

Before the season, the Knicks started sniffing around the trade market to gauge which guards would be available. Among the names they looked into, Chicago Bulls star Zach LaVine. But, after being mentioned in rumors for months, the Bulls kept their top player.

New York Knicks rumors: Lonzo Ball could be a target ahead of NBA trade deadline

Now, according to SNY’s Ian Begley, the Knicks are once again turning their attention to LaVine. Leon Rose, New York’s president of basketball operations, is keeping a close eye on Chicago with the hope that the organization decides to trade the guard this season.

While LaVine never played for Thibodeau, they do share roots with the Bulls. While Thibs orchestrated the trade that sent LaVine to Chicago for Jimmy Butler, the 25-year-old guard remains a fan of New York’s coach.

LaVine would be a fantastic addition for the Knicks. He is shooting a career-high 50.2% from the field this season, helping him average 27 points per game. He’s been a far more efficient shooter (59.2%) compared to the 2019 season (52.6%) and is also averaging career-bests in assists (5.3) and rebounds (5.2) per game.

Given the Bulls are in a rebuild, trading LaVine could make sense. He is only under contract for one more season, owed $19.5 million in 2021-’22, before he can enter free agency. Given the direction Chicago is headed, barring an overpay, he likely wouldn’t return.

With the Knicks, LaVine could become an even bigger star. Plus, for a franchise that has frequently whiffed on landing a big name, landing one via trade might be the best way to attract attention and start winning more games.