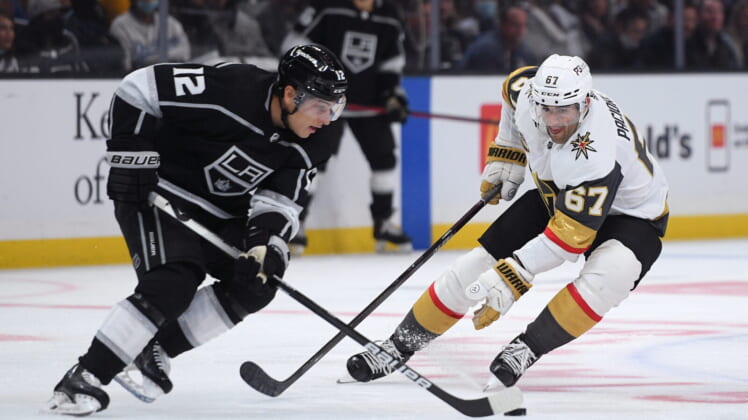 Despite having an almost week-long break between games, plenty of news has been coming out of the Golden Knights organization. After a big win over the Seattle Kraken, the Golden Knights dropped their next game against the Los Angeles Kings. The two points they gave up in the standings may not have even been the worst part of their night, as it has now been revealed some big names suffered injuries.

As the Golden Knights prepare for a matchup on Wednesday at home against the St. Louis Blues, take a minute to catch up on the latest news that you may have missed over the past few days.

The Vegas Golden Knights have provided an update on the health status of a few of their key players, including Max Pacioretty and Mark Stone, through a series of press releases and conferences. The big takeaways are that Pacioretty suffered a lower-body injury that will keep him from playing for a few weeks. Head coach Peter DeBoer referred to him as week-to-week with a lower-body injury.

Captain Mark Stone left last game against the Los Angeles Kings in a scary way as he couldn’t seem to put any weight on his leg. The good news is that his injury is considered less severe as DeBoer used the term day-to-day. However, Stone’s injury is also less apparent as to what it is and he will continue to see doctors who will be able to diagnose the issue more accurately in the coming days.

With forward Alex Tuch already sidelined due to injury, losing these two first-line players is a tough break for the Golden Knights. Mattias Janmark is another player that is currently unavailable as he remains in the COVID-19 protocol system.

Without all these forwards, the Golden Knights will need some of their depth pieces to step up in a significant way. Newcomer Evgenii Dadonov will be one of those players that the Golden Knights are forced to use in a more prominent role and he will be expected to contribute goals while Pacioretty and Stone miss time.

Peyton Krebs was sent down to Henderson before these games and he displayed that he is a bonafide full-time NHLer. He recorded five assists over the two games and also scored his only shootout attempt.

On Hockey Night in Canada, Jeff Marek reported that the Golden Knights’ efforts to trade for Jack Eichel had been thwarted because they’re unwilling to part with Krebs. Stretches like this one are a glimpse of Krebs’s immense potential and are evidence as to why the Golden Knights are reportedly reluctant to part with him.

Defenseman Daniil Miromanov continued his strong play from the preseason with four points over those two games, including two goals. The 24-year-old has been one of the stars from the start of this season and will be looking to get into the NHL lineup in the future.

The Golden Knights face off against the St Louis Blues on Wednesday. Robin Lehner is expected to get his third start and it remains to be seen if Mark Stone will be present in the lineup. After that, they play Friday night against Connor McDavid and the Edmonton Oilers in a matchup of two of the best teams in the Pacific Division.