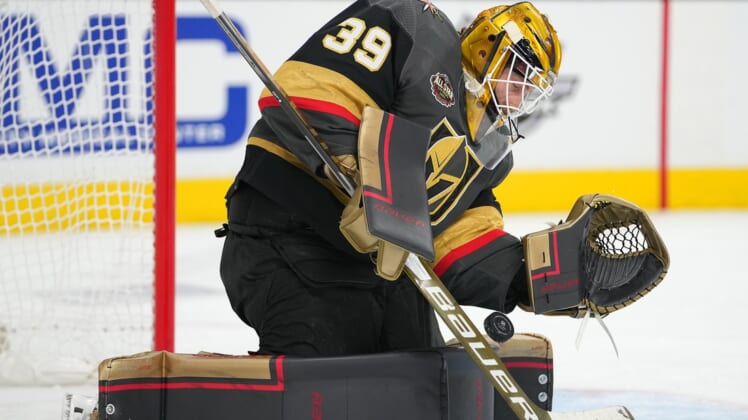 Nicolas Roy established a career high with his seventh goal of the season and Laurent Brossoit made 15 saves as the Vegas Golden Knights cruised to a 3-1 victory over the Anaheim Ducks on Friday afternoon in Las Vegas.

Adam Brooks and Mattias Janmark also scored goals for Vegas, which won for seventh time in last eight games and for the 10th time in its past 12 games to head into the New Year with a three-point lead over Anaheim in the Pacific Division. The Golden Knights finished with a 45-16 edge in shots on goal, including 35-10 over the first two periods while building a 3-0 lead.

Ryan Getzlaf scored and John Gibson finished with 42 saves for Anaheim, including a penalty shot stop of Janmark in the second period, as the Ducks lost in regulation for just the second time in their last 12 games (6-2-4).

Vegas took a 1-0 lead at the 11:15 mark of the first period when Roy deflected Ben Hutton’s shot from the right point past Gibson’s glove side.

Brooks made it 2-0 just before the end of the period with his second goal of the season, deflecting a Dylan Coghlan shot into the top of the net.

The Golden Knights made it 3-0 early in the second period when Janmark flipped in a long rebound from the left circle on the power play for his fourth goal of the season.

Janmark missed a chance to extend the lead later in the period when he was awarded a penalty shot after Josh Manson, who lost his stick, pulled him down as he broke down the slot. Gibson then stopped Janmark’s try with a blocker save.

Anaheim had a chance to get back into the game early in the third period but Troy Terry fired a shot off the crossbar and Nicolas Deslauriers fired wide on an open net after a Brossoit giveaway near the front of the goal.

Getzlaf then spoiled Brossoit’s bid for his first shutout of the season when he tapped in a rebound on the power play with 11.4 seconds remaining for his second goal of the season.