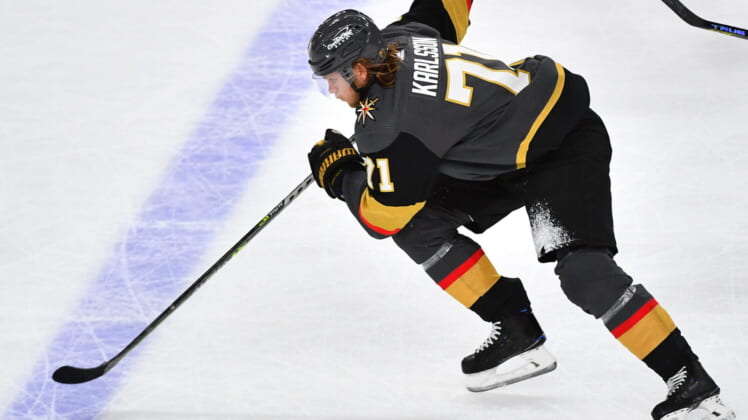 The Vegas Golden Knights enter Friday’s game losers of two consecutive games against the Los Angeles Kings and the St Louis Blues. They will look to reverse that trend against the Edmonton Oilers, the team that currently sits atop the Western Conference with four wins through their first four games.

It will be a big challenge for a Golden Knights team that will still most likely be without big names such as Mark Stone, Alex Tuch, and Max Pacioretty. In addition to all those injured forwards, Alec Martinez left last game after being shaken up during a collision in the corner. He didn’t practice on Thursday and is doubtful to suit up tonight.

While the Golden Knights began the season as large betting favorites to win the Pacific Division, injuries and a slow start coupled with the Oilers’ early success has led to a drastic shift where the two teams now have much closer odds. Both teams will be desperate tonight to prove that it’s their division to lose and this is only the first of what will be many intense battles this season.

Slowing down McDavid and Draisaitl

The Oilers boast the best one-two punch in the league with Connor McDavid and Leon Draisaitl atop their lineup. These are two of the best players in the league and they’re next to impossible to completely neutralize. Instead, the Golden Knights need to hope that they can find a way to slow these two down while not allowing the rest of the Oilers roster too many opportunities.

While these two have been on the ice together at 5-on-5 the Oilers have outscored their opponents 5-2. While it’s still early in the season and the sample size is small, the Oilers dynamic duo has been terrorizing opponents for a few seasons now. The offseason addition of Zach Hyman has only made this forward group more dynamic as he has fit like a glove.

The Golden Knights are giving up the fifth-most goals per 60 minutes at 5-on-5 so far this season. If this leaky defense continues, or if they allow the Oilers to get almost 40 shots as they did with the Blues the other night, this game could get ugly quickly.

Daniil Miromanov was one of the stars of the preseason and he has now been recalled from the Golden Knights AHL affiliate in Henderson. Not only did he impress during the preseason games that he participated in, he also got off to a hot start in the AHL with two goals and two assists in only two games as a defenseman.

While unlikely to get slotted into the lineup tonight, the injury to Martinez does mean that the Golden Knights are down a defenseman. Dylan Coghlan is likely to get the first look but Miromanov will be waiting in the wings for his opportunity to prove himself at the NHL level.