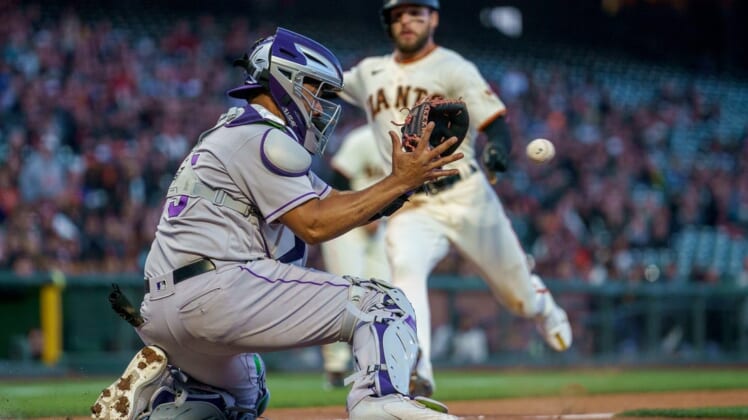 Colorado right fielder Charlie Blackmon’s misplay with one out in the bottom of the 10th inning allowed the San Francisco Giants to post a 2-1 victory over the Rockies on Wednesday night.

Luis Gonzalez singled to right off right-hander Carlos Estevez (1-3) and runner Donovan Walton was stopping at third until Blackmon failed to field the ball and it rolled behind him. Walton then rushed home with the winning run as the Giants defeated Colorado for the 13th time in the past 15 meetings.

Mike Yastrzemski had three hits and Thairo Estrada had a run-scoring single for San Francisco.

Blackmon was enjoying a good night until the game-deciding miscue. He recorded his 1,500th career hit on a double to left in the sixth inning. The milestone occurred one day after Blackmon hit his 200th career homer.

Overall, Blackmon had two hits, drove in Colorado’s lone run and also threw out a runner at the plate.

Colorado’s Connor Joe went 2-for-4 to extend his streak of reaching base to 34 games.

San Francisco shortstop Brandon Crawford was scratched from the starting lineup shortly before game time but popped up as a pinch-hitter in the ninth. He exited Tuesday’s game in the fifth inning due to right quadriceps tightness.

Giants left-hander Alex Wood gave up one run and five hits in seven innings. He struck out five and walked none.

Rockies right-hander Antonio Senzatela allowed one run and six hits over six innings. He struck out six and issued one walk.

The Giants answered in the bottom of the fourth. Darin Ruf smacked a one-out double to left-center and he scored from third on Estrada’s two-out single to left.

San Francisco threatened in the fifth as Gonzalez drew a one-out walk and moved to third on a single by Yastrzemski. Wilmer Flores followed by lining out to right field and Blackmon delivered a strong throw to retire Gonzalez at home.