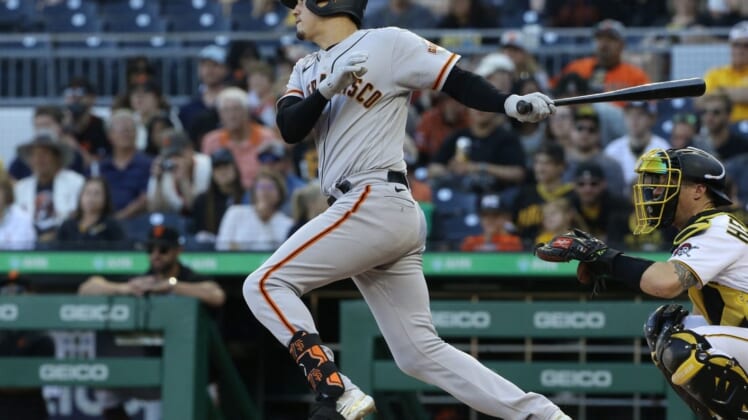 Wilmer Flores and Austin Slater homered and the visiting San Francisco Giants came back from a two-run deficit Saturday to top the Pittsburgh Pirates 7-5.

Camilo Doval pitched the ninth for his 11th save.

Diego Castillo hit a three-run homer and Daniel Vogelbach launched a solo shot for the Pirates, who have lost 11 of 12.

Wil Crowe (3-4) gave up two runs on two hits with two walks in 2/3 of an inning following Quintana on the mound.

Flores swatted his eighth homer, a shot to left field, for a 1-0 Giants lead in the first.

Pittsburgh tied it in the bottom of the first. Ke’Bryan Hayes singled and went to second on Bryan Reynolds’ groundout. Michael Chavis singled, and Castillo brought Hayes home with a sacrifice fly.

In the third, Curt Casali singled for the Giants, and Slater walked. An out later, Ruf’s RBI single made it 2-1.

The Pirates went ahead in the bottom of the third. Hayes doubled, and after Reynolds struck out, Hayes stole third. Chavis drew a walk, and Castillo followed with his fourth homer of the season to make it 4-2.

Slater’s fourth homer of the season drew the Giants within 4-3 in the fifth, and Giants pitching coach Andrew Bailey, in the dugout, was ejected by first base umpire Jim Reynolds in the bottom of the inning.

Quintana struck out Gonzalez to open the sixth, then was replaced by Crowe. Thairo Estrada singled, pinch hitter Brandon Belt walked and Crawford hit an RBI single hit to tie the game. Casali walked, and then Belt scored on Mike Yastrzemski’s pinch-hit sacrifice fly for a 5-4 San Francisco lead.

Against Chris Stratton in the seventh, pinch hitter Joc Pederson and Evan Longoria walked, with Pederson scoring on Gonzalez’s double, upping it to 6-4.

Vogelbach’s pinch-hit homer to right, his eighth of the season, came in the eighth against Dominic Leone, and it pulled Pittsburgh to within 6-5, but Crawford’s RBI double in the ninth restored the two-run lead.