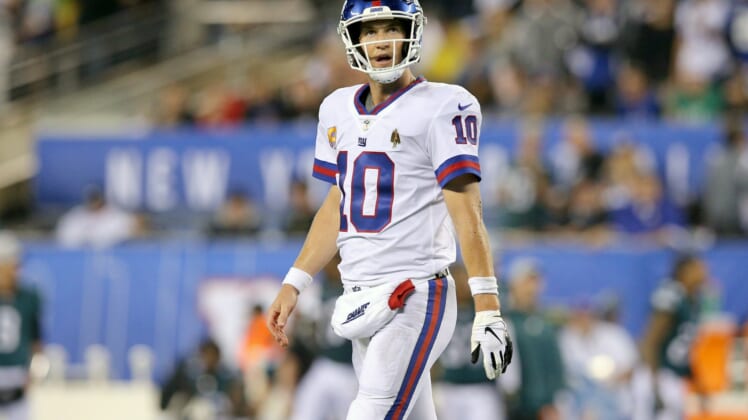 On Wednesday, New York Giants head coach Pat Shurmur confirmed one of the worst-kept secrets in the NFL, which is that Eli Manning will be back in 2019.

However, not long afterward when team general manager Dave Gettleman took the podium, it became clear that the team is not committed to Manning’s status as the starter.

Gettleman said that “you just don’t know” what could happen. He referenced other teams having drafted a young quarterback and that the torch was passed. He also wouldn’t say the Giants would not bring in a veteran in free agency.

Essentially, Gettleman is leaving all his options open, including Manning being a backup.

Interesting. Dave Gettleman not as willing to commit to Eli Manning in 2019 as Pat Shurmur was. pic.twitter.com/gaOzirqfXf

The Giants have the No. 4 overall pick this April in the 2019 NFL Draft. Depending on what happens at the top, they could be in a situation where the top quarterback is available.

We already know that Dwayne Haskins would love to play for Big Blue, and given recent reports about how the Giants feel about Kyler Murray, Haskins seems like the guy that makes the most sense.

Back to Manning, he does appear to be on his last legs. Though he completed 66 percent of his passes last year, he only threw 21 touchdowns and really struggled to get the ball to his top playmaker, Odell Beckham Jr., in the red zone.