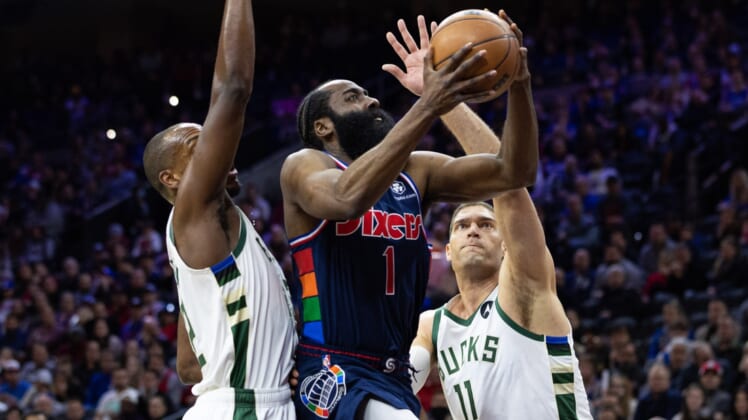 Giannis Antetokounmpo had 40 points, 14 rebounds, six assists and three blocked shots to lift the Milwaukee Bucks past the host Philadelphia 76ers 118-116 on Tuesday.

Antetokounmpo blocked Joel Embiid’s shot with 1.6 seconds left to preserve the win. The play was originally called goaltending, but the ruling was overturned after a video review.

Khris Middleton added 22 points, nine rebounds and seven assists and Jrue Holiday contributed 18 points and 10 assists for the Bucks (47-28). Brook Lopez scored 17 points and Grayson Allen had 10 as Milwaukee overcame a 14-point, third-quarter deficit to win for the third time in four games.

James Harden led Philadelphia with 32 points and nine assists, while Embiid added 29 points, 14 rebounds and seven assists. Tobias Harris chipped in 22 points and 11 rebounds for the Sixers (46-29), who have dropped two in a row.

Philadelphia surged into halftime with a 61-51 lead thanks in large part to Harden’s 16 points.

Antetokounmpo paced the Bucks with 17 on 7-of-11 shooting before the break.

After starting 1-for-8, Embiid hit seven consecutive shots, including a nifty turnaround in the lane for a 76-64 lead midway through the third quarter.

Wesley Matthews soon dropped in a 3-pointer from the wing and the Bucks closed within 78-69.

The Sixers led by 10 before Antetokounmpo scampered to the basket and threw down a one-handed dunk with 0.9 seconds to go to cut the deficit to 89-81 at the end of the third.

Danny Green was whistled for a flagrant foul against Antetokounmpo with 10:41 left in the fourth. Antetokounmpo knocked down both free throws and followed with a difficult layup on the next possession to close the gap to 91-87.

When Middleton hit a trey with 9:01 remaining, the Bucks went ahead 94-93 — the visitors’ first lead since the second quarter.

Embiid scored in the lane with 6:26 left to tie the game at 102. He missed the free throw for a potential three-point play.

Holiday made a 3-pointer and Middleton then converted 2 of 3 free throws after being fouled on a 3-point attempt, giving the Bucks a 107-102 lead.

After Harris’ tip-in cut the deficit to 114-113, Holiday came back with a 3-pointer for a four-point Bucks advantage with 1:20 remaining. Embiid then responded with a trey with 49.8 seconds left.

Antetokounmpo split a pair at the line with 13.2 seconds left before making the decisive defensive play.