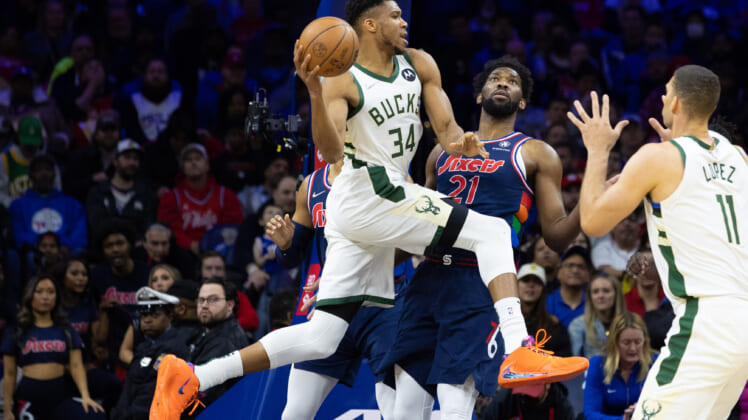 Giannis Antetokounmpo and his Milwaukee Bucks headed to Philadelphia to take on Joel Embiid and the 76ers at Wells Fargo Center Tuesday evening.

This late-season Eastern Conference matchup had a playoff atmosphere to it with the defending NBA champs going tit-for-tat with Joel Embiid and Co.

But it was the Greek Freak who stood out the most in this star-filled matchup. Not only did Antetokounmpo drop 40 points on 16-of-24 shooting while grabbing 14 rebounds and dishing out six assists, he played elite-level defense throughout the game.

That was no more true than late in the fourth quarter with Milwaukee holding a 118-116 lead. After 76ers guard James Harden missed a 26-foot step-back shot, Embiid was able to grab the rebound. That’s when Giannis Antetokounmpo swatted away his potential game-tying lay-up to give the Bucks an absolutely huge two-point win.

Talk about a season-defining defensive play by Giannis there. It represents a major difference in the playoff race and could send the defending champs on a late-season run.

By virtue of the win, Milwaukee moved to 47-28 on the season and one game up on the 76ers for in the Eastern Conference standings.

The Bucks are also now just one half game behind the Miami Heat for the No. 1 seed and home-court advantage throughout the Eastern Conference Playoffs.

These standings are about as close as they get. And in reality, one defensive play by the Greek Freak could tell us a whole lot about how things are going to end up with roughly two weeks to go in the regular season.

This performance came within the confines of the same game that saw Embiid score 29 points on 11-of-21 shooting while grabbing 14 rebounds and dishing out seven assists. The MVP candidate was his normally awesome self.

Related: Giannis Antetokounmpo and the top-50 NBA players of 2022

Prior to Tuesday’s electric performance, Giannis had been playing stellar basketball for the defending champion Bucks.

Despite dealing with a minor knee injury, Antetokounmpo was averaging 31.4 points, 11.8 rebounds and 5.6 assists on 56% shooting in his previous 27 games.

Embiid will have something to say about the MVP conversation when all is said and done. Reigning league MVP Nikola Jokic might be the favorite right now.

With all of that said, Antetokounmpo’s performance in a late-season game against a conference rival could vault him into the conversation. That’s especially true if Milwaukee somehow earns the No. 1 seed back east.