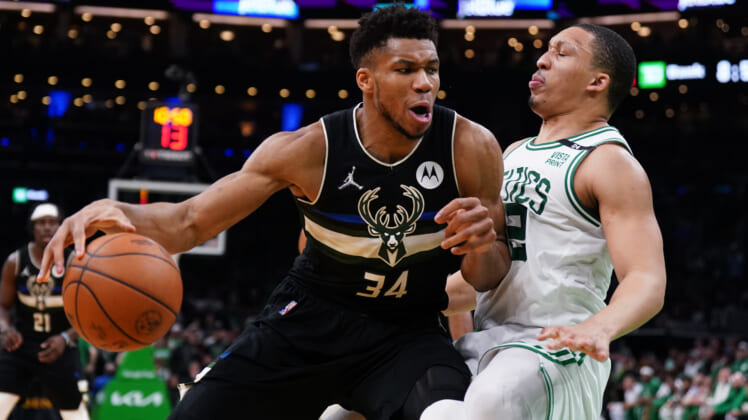 Giannis Antetokounmpo and his Milwaukee Bucks are coming off an ugly Game 6 home loss to the Boston Celtics with a chance to close out the Eastern Conference Semifinals.

The reigning NBA Finals MVP must now contend with the league’s best defense on the road in Game 7 Sunday afternoon. A win here would set up an Eastern Conference Finals matchup against the Miami Heat. A loss would end Milwaukee’s hopes of repeating as NBA champions.

Having to play without fellow star Khris Middleton throughout the series, the Greek Freak has done everything possible to will his Bucks to victory.

According to this note from former Portland Trail Blazers consultant Justin Kubatko, Giannis is in the midst of a history-making stretch. Including his 44-point, 20-rebounds peformance in Game 6, the two-time MVP has put up 160 points over the past four games.

That very same span has seen him grab 61 rebounds and dish out 22 assists. He’s the first player over the past 60 NBA postseasons to have averaged at least 40 points, 15 rebounds and five assists over a four-game span.

Those are some absolutely insane numbers. But they really don’t give Giannis enough credit for his brilliance thus far in the 2021-22 NBA Playoffs.

Over the first six games of the Celtics series, the 27-year-old forward (that’s a thing) is averaging 35.3 points, 13.8 rebounds and 6.8 assists on 47% shooting. Milwaukee is plus-13 when he’s on the court. The team finds itself minus-40 when Giannis is resting. Overall, he’s been absolutely insane thoughout the entire playoffs.

Milwaukee is plus-99 in the minutes Giannis has played throughout the first 11 games of the postseason. The team is a mere plus-33 when he’s on the bench.

The Bucks have needed this with Middleton still sidelined to a knee injury he suffered back in Round 2. With the All-Star wing sidelined, Jrue Holiday has struggled to the tune of 35% shooting from the field in the series. Pat Connaughton is the team’s third-leading scorer at 11.7 points per game. No other member of the Bucks is averaging double-digits.

Will this be enough for Giannis Antetokounmpo to lead his Bucks to a Game 7 win over the Celtics in Boston Sunday afternoon? We’ll find out soon enough. What we do know is that he’s playing completely out of his mind right now.