Giannis: The Improbable Rise of an NBA MVP, authored by Mirin Fader, documents multiple incidents of Kidd taking tough love to new extremes during his tenure as Bucks coach. Excerpts from the book in an inconspicuous Twitter feed about Kidd’s conduct went viral on Wednesday:

Because the text is a little jumbled and difficult to read, it’s worth recapping the incidents featured.

First of all, many who were interviewed for the book about Kidd asked before they fully commented whether or not their remarks would be on or off the record. Most chose their words carefully.

Anyway, Kidd made the Bucks practice to their breaking point on Christmas Eve after losing a winnable game the previous night.

Kidd put multiple veterans on the spot in the locker room following the loss, and while Zaza Pachulia and Jared Dudley tried to be “diplomatic” to defuse the situation, players had to cancel flights and all travel arrangements in the name of practicing the next day.

A three-hour practice preceded weight-lifting sessions and exercises in the pool, even though “half the team didn’t know how to swim,” as Fader writes. 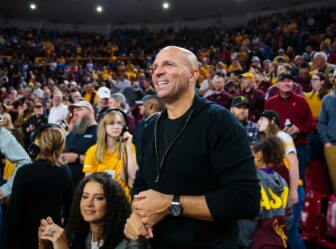 Kidd was especially vicious toward Larry Sanders, who, in a probably-not-unrelated story, walked away from pro basketball early in his career due to mental health struggles, namely anxiety. Having Kidd call him “pathetic” and ride him to a breaking point led Sanders to spend that night in the hospital.

Kidd also corrected Giannis, thinking the Greek Freak had blown a defensive assignment, only to be proven wrong by the game film during a halftime intermission. The coach benched Giannis all the same.

Dallas’ hiring of Kidd was already met with plenty of scrutiny for those who despise his off-court history, which has featured the low point of a domestic abuse guilty plea.

Mavs superstar Luka Doncic signed a max contract extension this summer, and while the 22-year-old’s financial future is fully secure, his chances of thriving in the NBA and competing for championships are far less certain.

It’s pretty clear that Kidd has failed in both his prior NBA coaching gigs. His record didn’t stack up, and in light of this account of his leadership on the Bucks, neither did his ability to healthily get through to players.

Although he had a Hall of Fame career as a point guard, the coaching circuit has been less kind to Kidd. He had one season as Brooklyn Nets head coach in 2013-14 and led them to the second round of the NBA playoffs, but didn’t return the next year.

In the middle of his fourth season in Milwaukee, Kidd was shown the door, having guided the Bucks to two first-round postseason exits in the three years prior.

Kidd served as an assistant on the Los Angeles Lakers coaching staff and was part of their championship team in 2020. Now, he’s earned his third head coaching opportunity in Dallas, but if he’s anywhere near the type of personality drawn in Giannis’ biography, the Mavs and Doncic’s career in general may be doomed.

Ties to the Mavs organization as a former player certainly helped Kidd get the job. Particularly after this unsavory portrait of him that’s now public, though, he’ll have a lot of trust to build among his players in Dallas.