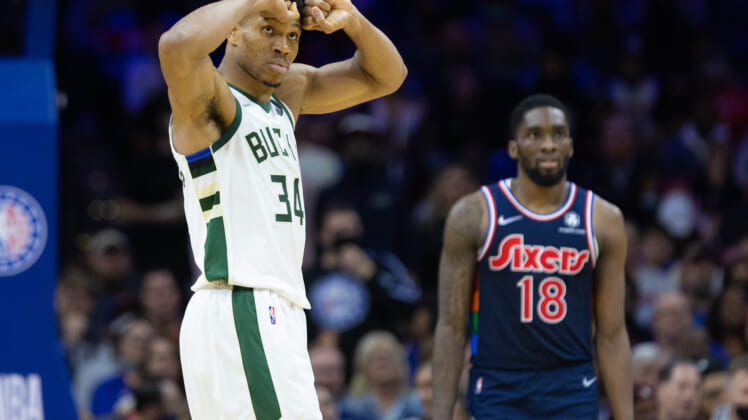 Milwaukee Bucks star Giannis Antetokounmpo brought the franchise a championship, its first NBA title since 1971. It came months after he signed a supermax contract extension, but it seems Antetokounmpo is already thinking about his future and the possibility of playing elsewhere.

Selected in the 2013 NBA Draft, the 6-foot-11 forward worked his way up from averaging under 25 minutes per game as a 19-year-old to become one of the best players in the NBA. While he is focused on winning another MVP and bringing another championship celebration to Milwaukee, a recent interview also hinted that he could be playing elsewhere before long.

In an excellent feature story by GQ Sports’ Zach Baron, the two-time NBA MVP and 2021 NBA Finals MVP indicated that leaving Milwaukee is very possible. While he loves the city, the former No. 15 pick also wants to find his next challenge, even if it means playing elsewhere.

“One challenge was to bring a championship here and we did. It was very hard, but we did. Very, very hard. I just love challenges. What’s the next challenge? The next challenge might not be here…Me and my family chose to stay in this city that we all love and has taken care of us—for now. In two years, that might change. I’m being totally honest with you. I’m always honest. I love this city. I love this community. I want to help as much as possible.”

Giannis Antetokounmpo on future with Milwaukee Bucks, via GQ

Fans have nothing to worry about for now. Antetokounmpo is under contract through the 2024 season, giving the Bucks multiple years to try and become the NBA’s next dynasty. But it’s also clear that a future exit is very possible.

Will Giannis Antetokounmpo leave the Bucks

This isn’t the first time Antetokounmpo has expressed an interest in taking on new challenges while still in a Bucks’ uniform. While the city has made a tremendous impact on him and his family, the 26-year-old is also keenly aware of other opportunities that could be out there.

The Bucks will certainly do everything in their power to make sure he never wants to leave. Milwaukee brought in Jrue Holiday and Bobby Portis last year, moves that played a pivotal role in the championship run. If the team falls short of an NBA championship in the playoffs, general manager Jon Horst will likely explore all avenues to create a championship-caliber roster.

It’s possible that Antetokounmpo specifically said two years, when he would still be in the middle of his contract, because things could change that quickly. But it would still be a surprise if arguably the best player in the NBA is no longer in Milwaukee by the time he must decide on his player option.