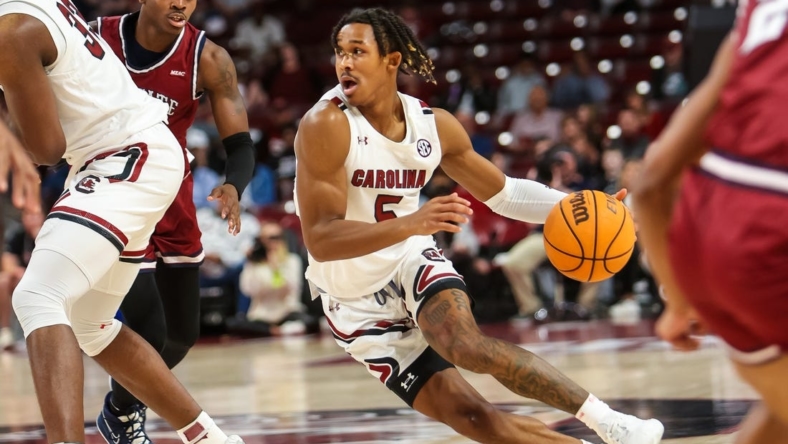 The season opener gave Jackson, the highest-rated recruit in program history and playing for his hometown team, a chance to showcase some of his skills.

He was upstaged at times by teammate Hayden Brown, a graduate transfer from The Citadel who posted 21 points in his first game for the Gamecocks. He hit 6 of 10 field-goal attempts and added five rebounds.

The Gamecocks had difficulty getting a grasp on the game.

South Carolina State was within 63-59 until Jackson converted a three-point play with 7:53 to play.

Wright notched five points as the Gamecocks stretched their lead back to a double-figure margin at 62-52. The lead was down to 72-69 after two Alston free throws with 2:21 to go before Jackson responded with a three-point play 20 seconds later.

Two Hallums free throws at the 1:47 mark cut the gap to 75-71, and the Bulldogs regained possession with a chance to pull closer. That didn’t happen, and Wright canned two foul shots with 53 seconds left.

Still, a Jackson turnover led to Everett scoring after an offensive rebound to make it 79-77 with three seconds left. A Wright free throw accounted for the last point.

The Gamecocks led only 36-33 at halftime after building a 15-point lead.

Part of the reason South Carolina State hung around going into the closing minutes was that the Bulldogs made 10 of their first 18 shots from the floor. They were 3-for-12 over the remainder of the half.