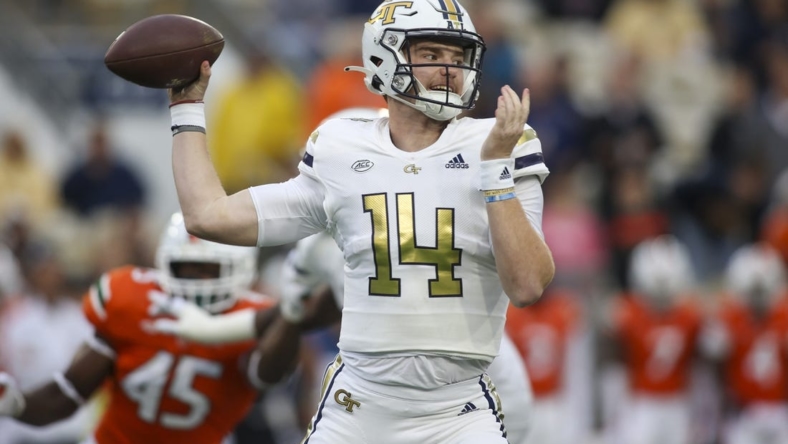 Georgia Tech quarterback Zach Pyron will miss the rest of the season after sustaining a broken clavicle during last weekend’s 35-14 loss to Miami.

Pyron fell hard on his left shoulder after running for 19 yards late in the third quarter. He was intercepted on the following play and didn’t return to the contest.

The Yellow Jackets previously lost starter Jeff Sims to a foot injury against Virginia on Oct. 20. The party line was that Sims was available in an emergency, but now with Georgia Tech in dire need, coach Brent Key says Sims is unavailable.

“In regards to Jeff, Jeff won’t be with the football team, really kind of indefinitely now,” Key said in Tuesday’s press conference. “We had meetings with Jeff and meetings with the doctors and the medical professionals and came to the determination that it would be best for Jeff to not be in meetings or not be in practice, but to be in treatment and in rehab right now moving forward.

“Decisions that are made are, like we have said since Day One, made in the best interest of the team and Georgia Tech and for the health and safety of our players.”

Zach Gibson finished up against the Hurricanes and is 25-for-51 passing for 224 yards, one touchdown and two interceptions this season. Gibson started a 41-16 loss to Florida State on Oct. 29 and was 2-of-3 passing for 0 yards before being replaced by Pyron.