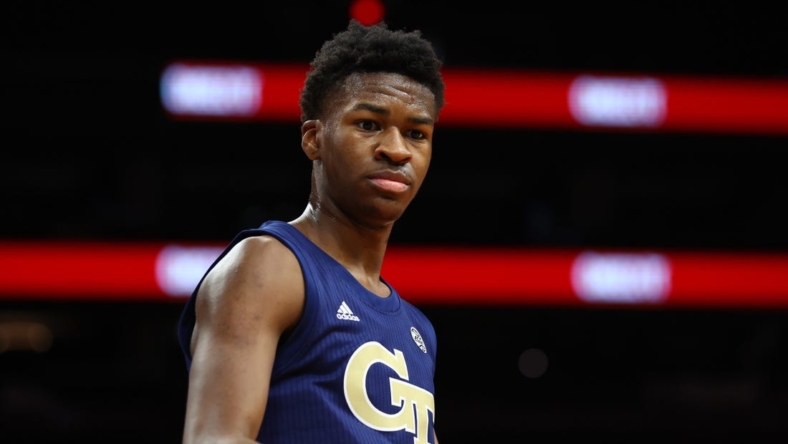 Miles Kelly hit a short jumper with 4.1 seconds left to give visiting Georgia Tech a 59-57 win over crosstown rival Georgia State on Saturday in Atlanta.

Georgia State erased a eight-point lead with 2:50 left and tied the game on a three-point play by Brendan Tucker with 26.2 seconds left. After a timeout, the Yellow Jackets got the ball to Kelly, who dribbled and drove past the Georgia State defenders to score the winning basket.

After a timeout, Georgia State’s Dwon Odom rushed the ball down the court, but it was tipped away and the Panthers never got a final shot.

Georgia State (1-1) was led by Ja’Heim Hudson with 23 points and 11 rebounds, his second straight double-double. The Panthers also got 13 points from Jamaine Mann and 10 points and six rebounds from Odom.

Georgia State put together a 13-0 run and held a 17-8 lead after a basket by Hudson with 11:07 left in the first. But Georgia Tech outscored the Panthers 12-1 and took a 20-18 lead on Deivon Smith’s basket at 5:49. Hudson, who had nine first-half points, scored on a short jumper with six seconds remaining to give Georgia State a 26-25 halftime lead.

This completes the three-game series between the two schools, who are only three miles apart in downtown Atlanta. It was the first time Georgia Tech had played at Georgia State since 2007 and was scheduled to celebrate the opening of Georgia State’s new Convocation Center.