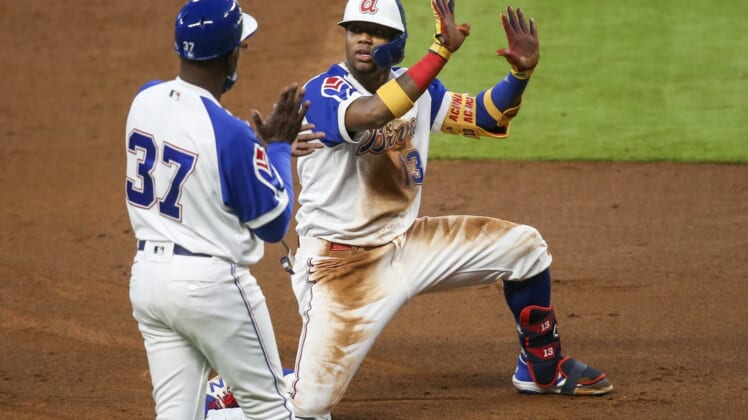 Garrett Cooper drove in three runs, including the go-ahead run in the 10th inning, and the visiting Miami Marlins rallied late to beat the Atlanta Braves 5-3 on Monday.

Cooper, who was 3-for-5, tied the game with a two-run double in the eighth inning, then put the Marlins ahead to stay with a single to center field off reliever Jacob Webb (0-1) that scored Jon Berti with the tiebreaker. Brian Anderson doubled in an insurance run.

The winning pitcher was Yimi Garcia (1-1), who worked the final 1 1/3 innings and set the Braves down in order in the 10th. He struck out one and walked one.

The Braves scored a run in the first inning on an RBI single by Marcell Ozuna.

The Marlins tied the game when former Braves outfielder Adam Duvall hit an opposite-field home run, his second, into the right-field stands.

Atlanta regained the lead with a run in the third. Ronald Acuna Jr. opened the inning with a triple and scored on Ozzie Albies’ sacrifice fly into shallow center field. The Braves made it 3-1 in the seventh on Albies’ second sacrifice fly.

The Marlins tied the game 3-3 with on Cooper’s two-run double off Nate Jones in the eighth. Atlanta relievers walked five batters – three of them by A.J. Minter — in the inning but left the bases loaded when Miguel Rojas lined out to center field to end the inning.

Miami manager Don Mattingly was ejected in the eighth inning after the umpires overruled Berti’s stolen base. He had been called safe on the field.