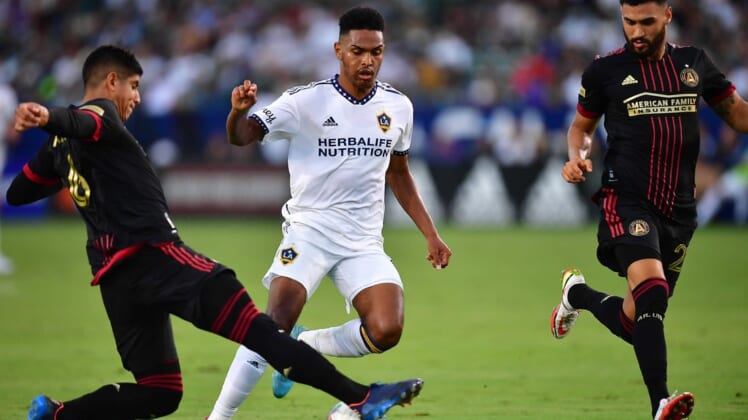 Kevin Cabral scored his first goal of the season early and substitute Dejan Joveljic found the back of the net for the eighth time in as many games to lift the LA Galaxy to a 2-0 victory over the visiting Atlanta United on Sunday night.

Cabral’s goal was his sixth in MLS since signing for the Galaxy (9-9-3, 30 points) prior to the 2021 season. Joveljic’s tally was his MLS-high seventh off the bench, with six of those coming in his exceptional eight-match stretch.

The victory snapped the Galaxy’s three-match losing streak and pushed Los Angeles back above the playoff line into seventh in the Western Conference.

United are now 12th in the East after their eighth consecutive away match without a victory and seventh road loss overall.

Jonathan Bond made three saves to preserve the Galaxy’s seventh clean sheet of the season after LA conceded 11 goals in its last five matches.

Cabral put the Galaxy ahead after seven minutes following an attack that began when Atlanta goalkeeper Rocco Rios Novo’s errant pass led to a turnover.

Rayan Raveloson eventually sprayed the ball wide for Douglas Costa, who dragged a cross back into the path of Javier “Chicharito” Hernandez.

Rios Novo saved Chicharito’s one-time shot, but the rebound fell to Cabral at the left post for a simple tap-in from close range.

Atlanta’s Ronaldo Cisneros missed a header from a promising position 10 minutes later. And 20 minutes after that, Cabral missed a golden opportunity for a second tally when, at full slide, he failed to redirect Julian Araujo’s well-struck cross on frame.

Most of the best second-half attacks fizzled before a truly threatening effort on target. But Joveljic sealed it for the home team when he timed his run to remain onside and reached Victor Vazquez’s throughball before curling a right-footed finish inside the far right post.