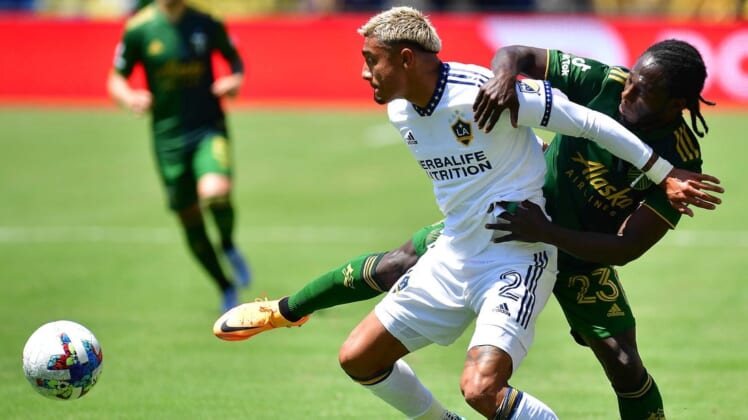 Dejan Joveljic scored in the 88th minute for his fourth league goal of the season to help the LA Galaxy salvage a 1-1 draw against the visiting Portland Timbers on Saturday afternoon.

Joveljic now has four goals and two assists in his last three matches in all competitions for the Galaxy (7-5-3, 24 points), who drew for the first time in eight home league games.

All of his goals have come as a substitute playing behind leading scorer Javier “Chicharito” Hernandez, although on Saturday he played 60 minutes after Victor Vazquez left the game early.

Yimmi Chara scored his fourth goal of the campaign for Portland (3-6-7, 16 points), which snapped a three-match losing run. The game was both teams’ first games of the month after breaking for the June international match window.

Felipe Mora, the Timbers’ leading scorer in 2021, made his first appearance of 2022 as a late substitute after having knee surgery in February.

Aljaz Ivacic made four saves for the visitors, who were trying to avenge an earlier 3-1 defeat to the Galaxy in Portland in April.

Chara gave Portland the lead in the 38th minute when he finished off a simple if well-paced counterattack.

Cristhian Paredes collected a loose ball just beyond his own penalty arc and sprayed a pass wide left to Sebastian Blanco, who pushed forward and then fed Chara on the break. Chara took the pass in stride, used two touches to control the ball and then with his third fired a low finish beyond Jonathan Bond and into the bottom left corner.

The Galaxy improved after halftime and frequently got into promising positions but did not often threaten Ivacic’s goal.

Chicharito had one of the few open chances to level in the 67th minute, only to miss the goal entirely from close range at the back post following a corner.

But Joveljic spared the hosts 21 minutes later. Efrain Alvarez had time on the right flank and curled an out-swinging cross toward the near corner of the 6-yard box.

Joveljic met it with a powerful flashing header into the far corner that left Ivacic little chance.